The rocky hillside surrounding an 800-year-old fortress forms several of the walls and floors of this school by DesignAware in Hyderabad, India.

Situated within a dense residential neighbourhood below the 16th century Golconda Fort, Hilltop School replaces a makeshift school in a large shed on the site, which was attended by local children for four years.

DesignAware's replacement was built on the lowest budget possible, while ensuring the only flat, open space on the site was retained to create a playground – described by the designers as "a rare commodity" in urban schools.

Hilltop School was therefore built on top of the uneven, rocky part of its hillside site, meaning its craggy terrain had to be incorporated into the building.

"Though the open playground on the upper part of the site was the easiest place to build, we decided not to disturb it and instead to design on the rocky cliff that connected the upper and lower parts of the site," said studio's director Takbir Fatima.

"We did this without breaking or blasting any of the existing rock on site, instead bringing the rock into the building and making it a part of the building, sometimes as walls and sometimes as floor," she told Dezeen.

Hilltop School was built by DesignAware after four years of raising funds for a building. Its scale and layout was dictated by the existing terrain, as well as some neighbouring dwellings with which it shares walls.

On the lowest part of the site, the school echoes the size of the adjacent houses, as it stands in place of one that was demolished to make way for an entrance to the building.

The new walls that were built by the studio are all made from red brick, which have been plastered with a cement finish. 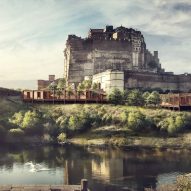 Brick and cement were chosen by the studio to ensure the walls were easily to maintain in the future to minimise costs. It is also intended to form a backdrop to "the very busy, kitschy and colourful walls of houses in the neighbourhood".

Inside Hilltop School, the classrooms and common spaces are equally minimal, some complete with the same cement finish, and some painted in light pastel colours.

This was chosen by the teachers so the children can use them as a canvas, writing and drawing on them using chalk.

Each classroom has bright-coloured detailing and furniture, which was chosen by DesignAware and the school's teachers to make the space more playful for the children.

The team based the colours, which include red, yellow, blue, along with green and orange, on those found on the dwellings throughout the neighbourhood.

This is seen across doors, windows, gates, staircases, skylight and also bespoke benches for the students that are shuffled around the classrooms so that there is a mix of colour.

Signage throughout the school is also made with bold colours to stand out against the cement walls.

In some of the classrooms, walls are also broken by windows, arranged to disguise a change in levels throughout the school.

"The execution team was an ensemble one, and a lot of issues with level differences meant a mismatch in the sill levels of windows," explained Fatima.

"We addressed this problem by staggering the windows and deliberately varying the sill levels and sizes of the windows, making them randomised to cover up any mistakes in precisely matching the levels."

One of the main rooms in Hilltop School is its library, which was carved from an "almost wasted" space that was initially thought to be unusable as it was dominated by a large rock.

To make use of the space, DesignAware placed huge steps and bookshelves around it, transforming it into arena-like seating.

Takir presented Hilltop School at the inaugural Hyderabad Design Week, which took place during the 9 and 13 October 2019 with the theme of Humanising Design.