Singer-turned-businesswoman Rihanna presented her fashion show as an hour-long music and dance performance on a stage filled with exaggerated architectural elements.

As creative director, Perron took his cues from the the lingerie brand's latest look book, which was shot on location in Morocco.

"We looked at architecture there and from a lot of southern Europe and north Africa – the iconography of the stairs and arches," Perron told Dezeen. "It's a mash up of a bunch of different things."

For the Fenty x Savage show, lines and shapes were simplified and modernised by Perron to create a backdrop. Celebrities, including Cara Delevingne, Gigi Hadid and Laverne Cox, and models were cast to represent a diverse range of ethnicities and sizes.

The set – which is mostly a facade supported by a elaborate construction of scaffolding behind the scenes – was an all-white backdrop that could be changed in an instant by shifting the lighting angle and colours.

"For us it was taking something theatrical and having verticality to it, and the feeling that you're in another place," said Perron.

It also had to accommodate the choreography, with stairways arranged strategically and platforms reinforced for the performers to dance on. 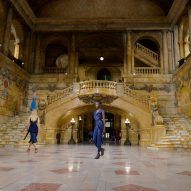 Perron, who has also designed sets for musicians including Drake, Jay Z and St Vincent, has collaborated with Rihanna on her live shows for years.

For the Savage x Fenty show they decided to make something that would break the mould of a traditional catwalk presentation, producing a hybrid show closer to an arena tour performance.

"The fashion show is so archaic," said Perron. "We used to have [John] Galliano with the train coming into the station, these mega theatrical pieces, [Alexander] McQueen shows."

Instead of the current standard 15-minute-long event with fashion elites and celebrities seated either side of a catwalk, the Savage x Fenty presentation was an hour long and opened with a performance from Rihanna, spotlit on a central podium.

"The opening piece with the plinths was actually retrofitted into the existing set," said Perron. "Rihanna saw the choreography and loved it and wanted to be a part of the opening segment.

Phones were banned from the venue and the live show was recorded and streamed via Amazon Prime a week later.

"I think it's great that someone can sit down and watch an hour long fashion show," says Perron.

Despite the tech ban, the show is still divided up in a way that makes it consumable in the social-media age.

"It is done in bite-sizes. If you take the show apart it can be consumed in four or five-minute segments, so it still works for the attention-deficient generation," jokes Perron, referencing a fashion-conscious audience used to the endless scroll of Instagram.

Perron finds a lot of his inspiration online. He keeps a folder on his computer desktop of images that interest him, collected by his magpie-like approach to visual inspiration.

"I scour the internet. Anything I've found that I like or inspires me for some strange reason I pull aside. I have a constantly evolving book library at the office," he said.

"Everything from snapping photos on the street, travel and random social media stuff."

Yesterday the Architect's Newspaper published an opinion piece suggesting that Perron and Rihanna were referencing the Palazzo della Civiltà Italiana – a building in Rome commissioned by Benito Mussolini considered an example of Facist architecture.

However, the colosseum-style arrangement of arches also appears in a lot of Mediterranean modernist buildings, including Maltese architect Richard England's Aquasun Lido in Paceville, Malta.

Earlier this year the Lido in Malta was the backdrop for a fashion shoot featured in Kinfolk Magazine, which shot models against the rendered arches, staircases and circular openings.

Photography is by Antony Boyle.