Workstead debuted the collection inside Johnson's Modernist residence, which he built for himself in New Canaan, Connecticut in 1949, for a day-long display this week. The studio chose the location because it referenced the work of Johnson, and his modernist contemporaries including Mies Van der Rohe and Le Corbusier, for the series.

"With Archetype, we were inspired to create a lighting collection through an architect's lens," said Robert Highsmith, co-founder of Workstead. "I love the idea that Johnson and other modernists were approaching a lighting fixture as they would a building."

"Our fixtures embody the same architectural references and proportions – a structure that is fundamentally refined and functional," Highsmith added.

The aesthetic of an existing light fixture by mid-century American design Richard Kelly, displayed in Johnson's living room, is also echoed throughout the collection.

The modern and postmodern tendencies of Johnson's work can be found in Gable, which was displayed in two forms inside the famous house. One is a long brass triangular pendant attached to a black structure that wraps over the bar counter. The frame mimics the appearance of the artwork stand featured in the living room. 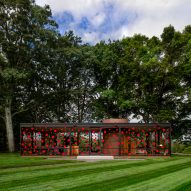 "There is a very sculptural aspect to the fixtures so that they can exist as objects in it of themselves," Highsmith added.

"We're really pleased that we could so seamlessly integrate the work within the setting."

A sconce version of Gable was affixed to the wall on the left side of the bed. The design features a black exterior and a bronze interior and is formed by a three-dimensional black triangular shape that protrudes over a smaller prism nestled inside the fixture.

Vault, which was displayed in the house as a floor lamp, alongside Johnson's leather topped desk, uses silver nickel to form a semi-circular upper part that is completed by a smaller round piece inserted inside the larger piece.

Block stacks rectangular brass boxes of varying sizes on top of one another to form sconces creating a "relief-like sequence" of dimensions.

Each fixture in the series is turned on by a string ,with a small sphere at its end, that hangs from its centre.

Workstead developed the collection to coincide with the 100th anniversary of the Bauhaus this year, which is describes as the "foundation of the birth of modernism" in America.

The property's site now functions as a museum and a gallery, and frequently hosts exhibitions and installations by guest artists. In 2016, Japanese artist Yayoi Kusama covered the property in red polka dots, while Fujiko Nakaya engulfed the house in dense clouds of mist in 2014.

Workstead, which Highsmith founded in 2009 with Stefanie Brechbuehler and Ryan Mahoney, recently completed the renovation of its showroom in Hudson, New York. Other lighting projects by the design studio include a series that was formed using reconfigurable metal rods and another that was designed with brass disc-shaped reflectors.

Photography is by Matthew Johnson.