Ceramicist Raina Lee has made a showroom for pottery with her partner, architect Mark Watanabe, inside a stilted shed in the backyard of their home in Los Angeles.

The 68-square-foot (6.3-square-metre) structure hides behind the couple's house in Los Angeles' Mount Washington neighbourhood. The cabin was already built on the property when Lee purchased it in 2013, but she had no intention of using the extra space to showcase her work.

"I purchased the property but didn't have an intended use for the treehouse, besides the occasional tea and morning yoga," the artist told Dezeen. "Eventually we realised it would make sense to use the treehouse as a dedicated showroom."

The shed is raised on stilts to match the height of surrounding trees. It is accessed from wooden steps that lead to a bridge lined with bungee cords. Fir wood clads the exterior of the mini structure, which is also fronted with large glass windows that draw in light and provide views of the verdant surroundings.

"The treehouse is made out of exposed wood which helps it blend in with the trees on the hillside," Watanabe said.

Plywood comprises much of the interior's details including its furnishings and accents. Lee chose the simple material to draw attention to her "maximalist" ceramics.

"The treehouse is mostly plywood, which provides a blank slate for the ceramics, which are often maximalist," Lee said. "The clean interior of the treehouse helps showcase the variation in the work."

For the centre of the one-room dwelling, the couple created a small circular tea table with geometric legs made from plywood. The slender building material also lines the cabin''s four walls. 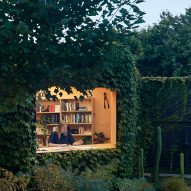 Having ample room for storage and display of the pottery was the most important consideration of the project's design. Using scavenged wood from an old shipping crate, Lee and Watanabe built several shelves that span the showroom's back wall.

"All of the the wood for the shelves was reclaimed from local sources," the couple added. "The horizontal planks came from packing crates and the vertical members came from branches cut directly from the plants on the hillside."

Supports for the ledges were crafted with juniper branches sourced from the surrounding nature. The joints vary in thickness and their differing heights correspond with the space between the shelves.

Shorter objects are placed on the low hanging shelves, while pieces that require more height fit on the upper shelves where the spacing is larger.

Lee's ceramics, which experiments with texture, form, and chemistry, are arranged in a line across the hand-cut ledges. Her kiln is located on the property, steps away from the showroom and the studio is housed in the main house's laundry room.

Lee and Watanabe's outpost follows other artists creating similar structures on their properties to display and carry out their work. Matt Gibson designed a 10 square metre shed for a writer's studio and architect Richard John Andrews built a tiny studio space in his garden.

Photography is by Mark Watanabe.