A copper-clad "light scoop" sweeps through the interior of this home in Dublin, wrapping back on itself to cover a rooftop room overlooking a terrace.

Designed by local practice ArchitectsTM, K House sits behind a period house overlooking a cul-de-sac, with views out to the nearby grand canal and Rathmines church.

Coated in a cream coloured render, the home faces out to the street with a high curved wall, marked with only a few carefully-placed windows set within deep reveals.

The design of the home focused on the the creation of different spatial qualities within the small site, which has restricted light to the east and south.

"We collectively considered the idea of comfort as not just a stable thermal environment but as the capacity of the occupants to experience different situations with regard to light and shadow," said the studio.

To achieve this the large light scoop was introduced, defining the home's section and creating spaces both underneath and within its curved form.

"The house takes the form of an inhabited light scoop to provide spaces for refuge and prospect, and extends between two outside rooms, a ramped entrance court with a small water pool to slow and dissipate the city and a roof terrace," explained the practice.

Across three floors, this light scoop runs through each level, with bedrooms and bathrooms on the ground floor, living and study spaces on the first floor and a kitchen and dining mezzanine at second floor level. 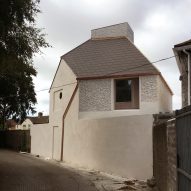 Described as "at once without and within" by the practice, the scoop has been finished with copper on its outer edge and pale wood on its inside, and sits sandwiched between two thick rendered walls.

These walls have been left exposed on the interiors, and niches have been made in them to create space for wardrobes, light fittings and spaces such as the kitchen and bathrooms.

A simple staircase connects the ground floor to the first floor, entering into the base of the scoop into a shiny, copper-clad landing area.

Once inside the scoop on the first floor, illuminated by large windows and light bounced down from the above, an angular, white metal staircase leads up to the rooftop space.

This rooftop kitchen space then opens out onto an area decked with sapele timber, finished with a concrete seating area and providing views of the city below.

Flamed limestone has been used for the flooring both at ground floor level and in the entrance court, to provide a sense of continuation when entering the home. While shiny on the inside, where copper has been used to clad the scoop's exterior it has taken on a dark, patinated appearance.

Copper was also used recently by Gianni Botsford architects to clad the roof of a home in London, also called House in a Garden.