Instead of the usual four suits of wands, cups, swords, and chalices, the IKEA tarot is divided into four brand-themed suits including sofas, lamps, dowels, and Allen keys.

The Llovers card, for example, depicts a couple who are about to assemble a piece of furniture – a playful reinterpretation of the traditional tarot card of The Lovers, with an extra L in the title to invoke the Swedish language.

"IKEA assembly manuals are already meant to be iconic and cross-cultural and so I felt like they'd done a lot of the ground work you need for a tarot deck," Leffert told Dezeen.

The Töwr tarot card, which typically depicts a solid tower on fire after being struck by lightning, has been redesigned in IKEA-style as a bookcase that is toppling over due to the weight of someone who is trying to climb it.

Other cards feature products such as IKEA's Luriga hedgehog night light, under the "lamps" suit, or an image of an L-shaped sofa being assembled.

On the back of each card is IKEA's characteristic blue and yellow colours represented in the form of two ovals to emulate the company logo.

"People go to IKEA at times of life changes – starting college, moving in, breaking up, having a baby – it's just rife with metaphors," said the creator.

"When you see an IKEA couch, you're not just seeing a couch, you're seeing a memory, a part of your life that evokes certain feelings, and what they sell there is for such basic human needs: light, comfort, a place to rest, Swedish meatballs," he added.

"Ikea is a place of transition, a journey, a source of light and comfort, but also strife. Ikea contains the universe," reads the creator's description of the cards on Etsy.

"Harness that power to understand your own life with these cleanly designed IKEA-themed tarot cards," it reads. "They'll go great sitting on your BILLY bookcase or on the table next to your MALM bed-frame."

In addition to software engineering and designing on the side, Leffert, who previously worked in Silicon Valley, is also running for president.

His campaign focuses on three main issues of the climate crisis, breaking up large tech-companies and a policy that supports immigrants. 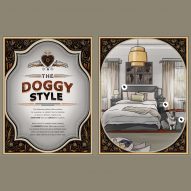 While IKEA itself wasn't involved in the making of these tarot cards, the Swedish furniture giant isn't adverse to similar tongue-in-cheek products.

Earlier this year the company released its own playful version of the Kåma Sutra, billed as the "ultimate guide to bedroom satisfaction".