Architects could have more influence if they applied their skills to video games instead of designing "rich houses for rich people", according architect and film director Liam Young, who spoke at today's Dezeen Day conference.

Young said architects should utilise their skills in the design of "digital urban environments that a billion people play in every day" to help them become better designers.

By visualising imaginary worlds, he said in his keynote at Dezeen Day, architects will begin to "understand our own world in new ways" – helping them to move the industry forward and prepare for the future.

"Why aren't architect designing the environments for video games? Why does someone that essentially did a YouTube tutorial on Unreal Engine get to do it?" asked Young.

"We've studied for seven years and we design rich houses for rich people," he continued. "Why can't we design in a digital urban environment that a billion people play in every day?"

Young explained that adopting film-making techniques in architecture will also enable designers to help develop technologies that humans want, rather than settling for the ones that are sold to us.

"What we try and do a lot with our work is explore ways that as designers, we can use the tools of fiction and speculation to try and preempt what might come so that we're not just kind of waiting in line for the next iPhone to be released," he said.

"Are we a customer or a citizen in the futures that we're designing?," he asked the audience.

"I hope that by understanding these technologies and all the various futures they set in motion that we may become more critical consumers and producers of our own kinds of futures," he continued.

"We need to look at popular mediums"

Young, who describes himself as a "speculative architect", uses architecture and film-making as a means to imagine alternative worlds that are impacted by the technologies and lifestyles of today.

He heads up the Master of Science in Fiction and Entertainment course at the Southern California Institute of Architecture (SCI-Arc), which aims to "widen the scope of architecture beyond just buildings alone" and apply architectural thinking to fiction and entertainment.

"The digital ephemera of our popular culture now fills all of our physical spaces and permeates our lives through our screens, our headsets or our augmented-reality contact lenses," said Young.

"Films build worlds that have really important ideas of what our future cities might look like," he continued.

"If we value what we do as architects, we need to look at these popular mediums without disdain and use them to understand the future of our cities." 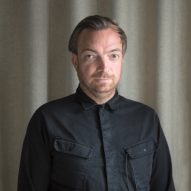 Young was the director of BAFTA-nominated film In The Robot Skies – the first movie ever to be shot entirely by drone-mounted cameras.

In 2018, he was one of the interviewees in Dezeen's short documentary Elevation, in which he predicted that drones could become "as disruptive as the internet".

Dezeen Day is taking place today, 30 October 2019, at London's BFI Southbank. It aims to set the global agenda for architecture and design and addresses key topics including future cities, transforming design education and the circular economy.

Other keynote speakers include MoMA curator Paola Antonelli, who said humans need to design a better future for the planet, and anger can be a good engine for that change.