Although few overtly Bauhaus buildings were built in the UK, the movement's ideals had a huge impact on British architecture. Beyond Bauhaus curator, Pete Collard, picks four buildings that demonstrate the school's influence.

The Beyond Bauhaus exhibition at the Royal Institute of British Architects in London aims to explore the influence that the German design school, which was established 100 years ago, had in the UK.

Collard believes that it was the philosophies behind the Bauhaus, and its founder Walter Gropius, that have had the greatest lasting impact on architecture in the country.

"The impact of the Bauhaus on Britain was perhaps not stylistic, as modernism was already underway, but more to do with the philosophies that Gropius typified and brought to the UK in 1934," Collard told Dezeen.

"His vision for a newly defined role for the architect in society was centred around collaborative working, the adoption of new materials and construction technologies, ideas that were not yet prevalent in contemporary practice at that time but that was transformative to many younger architects."

Within the exhibition Collard and co-curator Valeria Carullo trace how the ideal behind the Bauhaus school, along with some of its teachers, came to the UK and how its ideals spread.

"Our exhibition initially shows 'what happened next' to some of the key Bauhaus figures in the immediate aftermath of the school's closure in 1933, but from there we consider what impact the arrival of Gropius, Marcel Breuer and László Moholy-Nagy in Britain had on British architecture during the 1930s and beyond," said Collard.

"In particular we wanted to show that influence can be traced through ephemeral moments such as public lectures and exhibitions as much as any completed buildings." 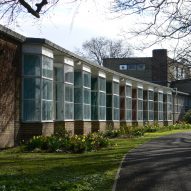 "We hope the exhibition demonstrates that modernism is a complex, multi-layered language and that a show centred around the Bauhaus can discuss Le Corbusier as well," said Collard.

"Because much of the material on display is archival and primarily 2D – drawings, photographs and ephemera – we wanted to offer a more dynamic exhibition design than people might have anticipated, something that would encourage closer looking and create a more physical engagement within the gallery space."

Read below for Pete Collard's choices from the exhibition that demonstrate the breadth of influence of the Bauhaus in the UK:

Collaborative design was central to Gropius' tenure at the Bauhaus and his later teaching in Harvard, and formed the basis for his theories on architecture practice. "True leadership can emerge when all members have a chance to become leaders by performance, not by appointment," he claimed.

In Britain, such approaches to practice were not seen until the post-war era, when a series of County Architects were established to design the social housing and public infrastructure projects being planned.

In Hertfordshire, the council recruited a team of young and progressive architects, including Mary Crowley and Stirrat Johnson-Marshall to deliver a programme of new schools. Johnson-Marshall had been inspired by a visit of Gropius to Liverpool University in 1934 and his new role as Deputy County Architect allowed him to bring the German master's philosophies into action.

The office operated as a collaborative practice, sharing skills and experience and liaising closely with teachers to unite the disciplines of architecture and education in a joint purpose. Over 100 new facilities were built in the county in the first ten years, based on a standardised grid system and using pre-fabricated industrial components, as Hertfordshire became a world leader in school building.

A founding principle of the Bauhaus was the belief that art should engage with all aspects of human life. Gropius carried this ethos forward into his architecture practice, as demonstrated when he asked Henry Moore to create a sculpture for his scheme for Impington Village College in Cambridgeshire in 1937.

Although the plan was scrapped due to costs, Moore's design was later commissioned for a new school in Stevenage, part of a generous programme across Hertfordshire that saw one per cent of the county's annual budget spent on contemporary art, to be installed within the schools and grounds.

A more significant iteration of Gropius' concept saw the participation of abstract artist Victor Pasmore in the design of housing for the new town of Peterlee in County Durham. Following the early departure of Berthold Lubetkin from the project, Pasmore was appointed consulting director of urban design, using his paintings as the basis for the landscaping and layout of the 300-acre Sunny Blunts estate.

At the centre of the estate is the Apollo Pavilion, a cantilevered concrete cubist structure designed by Pasmore, set above an artificial lake as a symbol of the estate's intentions to synthesise architecture and art.

Across town from the Bauhaus, the Törten housing estate was commissioned by the city of Dessau as an experimental solution for cost-effective mass housing. Designed by Walter Gropius with the Bauhaus's department of architecture, the estate was planned under the premise of "light, air and sun", and worked to a modular design principle that saw some components manufactured on site.

Some of Gropius' ideas are visible in the Span Development housing built in the 1950s and 1960s, at 63 sites across the south of England.

The housing was designed by Eric Lyons, who worked as a junior architect in the office of Gropius and Maxwell Fry in the 1930s. He believed, like his former employer, that architects should provide a service to society, and sought to create village-style communities that integrated roads, houses and play areas into "total environments".

The Span scheme for New Ash Green in Kent was proposed as a complete village with nineteen neighbourhoods, each featuring 100 to 150 homes and designed using elements of the modular forms seen in previous estates. All the houses faced or backed onto common green areas, with Lyons and his team also designing many of the village's community and public facilities.

The Bauhaus' move to Dessau in 1928 resulted in part from Walter Gropius' desire to strengthen the links between his students and industry. The adoption of industrial materials was fundamental also to his architecture practice, although this created problems upon his arrival in the UK.

Gropius' plans for Impington Village College ran significantly over budget as the standardised components he specified were not yet in production in Britain. It was only in the post-war era that standardisation could be implemented to scale and delivered at pace, as seen in the school building programme of Hertfordshire County Council.

The visibility of the factory-made structural components in many of the schools was to become a central facet of the high-tech style, pioneered by Team 4 in the 1960s, a practice set up by Su Brumwell, Wendy Cheesman, Norman Foster and Richard Rogers.

The firm's last project was the Reliance Controls Factory in Swindon, a flexible, low-cost design built using available, standardised components. Foster's later IBM Technical Park in Greenford, Middlesex was built to a similar ethos, a split scheme linked by block on pilotis that traverses a service road, a plan remarkably similar to that of Gropius' Bauhaus building in Dessau.

Main image is by Edmund Sumner.