BIG founder Bjarke Ingels, architect Shigeru Ban and artist Olafur Eliasson are among the "distinguished thinkers and practitioners" that have been selected as ambassadors for the EU's New European Bauhaus.

The creatives will work together as part of a high-level roundtable for the new Bauhaus initiative, which is being established to move Europe towards a circular economy.

The project will also help deliver the European Green Deal – a set of policies set out by the European Commission to make Europe climate neutral by 2050.

Danish architect Ingels, Japanese architect Ban and Danish-Icelandic artist are among the 18 specialists from a variety of fields to have been selected as members of the roundtable.

As part of it, they are expected to act as community ambassadors for the New European Bauhaus, "bringing inspiration" to the project while helping to establish and facilitate its framework.

"A high-level roundtable with distinguished thinkers and practitioners, established through a series of semi-structured interviews, will serve as a sounding board for ideas and as community ambassadors," the European Union has said.

"Drawing on the examples collected and on the conversations they generated, it will become clear how the New European Bauhaus initiative can boost, scale-up, and support the generation of beautiful, sustainable and inclusive places."

"A new cultural project for Europe"

Plans for the New European Bauhaus were revealed by European Commission president Ursula von der Leyen in 2020 during her inaugural State of the Union address to the European parliament.

At the time, she described the project as being a cultural and sustainable movement "where architects, artists, students, engineers, designers work together". 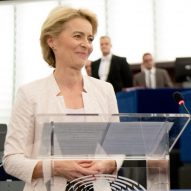 "This is not just an environmental or economic project: it needs to be a new cultural project for Europe," Von der Leyen explained. "I want NextGenerationEU to kickstart a European renovation wave and make our Union a leader in the circular economy."

Von der Layen also spotlighted the extensive environmental impact of the built environment in her address, calling for the construction industry to be made less wasteful and more sustainable, and encouraging the adoption of timber as a building material.

Climate scientist among other practitioners

Among the other specialists on the high-level roundtable is architect Pia Maier Schriever, urbanist Eszter Dávida, and innovation advisor to the European Commission, Michela Magas.

According to the organisers, this varied selection of professionals from a variety of fields is "crucial for the success" of the initiative.

The Bauhaus, which translates as "construction house" in English, was founded by Gropius in Weimar, Germany to unify art and crafts.

It is one of the world's most influential design movements, with Mies van der Rohe, Marcel Breuer and Anni Albers among the illustrious designers to have passed through the school before it was closed in 1933.

In 2019, Dezeen's Bauhaus 100 series celebrated the school's 100th anniversary with a series of profiles of its key proponents and designs.