The Paris-based designer, who is best known for his grungy, gothic-inspired clothing and footwear, has been creating furniture for over a decade, inspired by various historical references including Brutalist architecture.

The Glade seating system is made up of modular units with a C-shaped profile that can be combined to create a lounge area of any size. Corner modules can be added to create a greater sense of privacy and intimacy.

The furniture is made from plywood and covered in army blankets – materials that have previously featured in Owens' fashion and furniture collections.

Each unit can stand alone and incorporates built-in lighting, an internet conduit and a phone-charging point. Large, upholstered cushions can be added to the bench units to create comfortable spots for lounging.

The monolithic forms of the furniture units echo those of a bed originally designed for the Paris live-work space he shares with his wife Michele Lamy, who is also a collaborator on all of his furniture projects.

"The furniture is an exercise that is playtime for Michele and me," the designer said in a video interview with Carpenters Workshop Gallery director, Loic Le Gaillard. "It's a private conversation, we don't even think about other people."

"I hold the pen," he added, "but Michele's execution is what makes it happen and it's really a conversation between her and me." 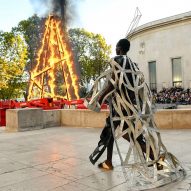 Owens launched his fashion label in 1994, and showed his first catwalk collection in 2002.

He moved to Paris from California in 2003 and now fronts a business with nine stores, an e-commerce site and several diffusion lines, as well as working on his furniture collections.

Owens has previously said his furniture designs, which include a set of plywood chairs adorned with antlers, reference the work of artists such as Donald Judd and Richard Serra, as well as designers including Robert Mallet-Stevens and Jean-Michel Frank.

He has also claimed that he looks to architecture for inspiration more than fashion, with the work of Le Corbusier, Luigi Moretti and Carlo Scarpa influencing his rational use of form and pared-back material palette.

The Glade furniture was presented during the 2019 London Design Festival at Carpenters Workshop Gallery in Mayfair, where the modular units entered through the first-floor windows with the aid of a crane.

The Glade products were presented alongside some of his aluminium Prong stools, a new edition of the sculptural Curial chair, and Aztec-inspired headdresses that featured in his womenswear show at Paris Fashion Week.

In addition to developing his own fashion collections, Owens regularly collaborates with some of the world's biggest brands, and has previously created leather boots with blade-like soles for Adidas, as well as sandals featuring calf-hair uppers for Birkenstock.