Architects Liani and Jan Douglas have transformed a century-old house in Green Point, Cape Town, into a modern home where they can show off their distinctive furniture designs.

The pair, who lead South African architecture and design studio Douglas & Company, completely remodelled the interior of the 120-year-old cottage and added a new storey on top.

Called Arklow Villa III, the property forms part of a trio of identical cottages on the street. The new design aims to celebrate its original features, while also bringing it into the 21st century.

"We made the decision to do what was right for the building, rather than to strictly adhere to a brief," explained Liani Douglas.

"The goal was to transform an insular single-storey dwelling into a light-filled, two-level house," she told Dezeen. "But we also wanted to retain the special soul of the house."

"Although in dire need of a facelift, it had a real personality pre-renovation," she continued.

The couple bought the house in 2012 and lived in it for several years before starting their refurbishment. This gave them plenty of time to work out exactly what they wanted to do.

The front facade was made to look very similar to how it did before, to still match with its neighbours, even though the original veranda was replaced with a new one that is more lightweight in appearance.

The new first floor is largely invisible from the front, save for a pair of new dormer windows that puncture the original roof. The rear side is a different story – here a new double dormer extends all the way across the roof to create the extra space.

South African pine was used to build the new structural elements. This material is left exposed throughout the interior, bringing a warmth to both existing and new rooms.

"In South Africa, pine is a sustainable timber that is readily available and widely used in the construction industry," said Liani. "However it is normally hidden away behind plasterboard, and not celebrated as a beautiful material in its own right."

Some of the original roof trusses, removed during the renovation, have also been reused to create characterful details in the living areas.

The layout of the ground floor follows the original floor plan, but with a few significant changes.

The old entrance lobby, lounge and dining room have been combined into a generous open-plan living space, while the old bathroom is replaced by a small en-suite slotted between the bedroom and study, leaving space for a new courtyard at the rear. 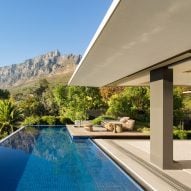 A master bedroom, bathroom and snug are located on the floor above. The staircase leading up to them starts as a simple wooden stair, but becomes more of a spiral towards the top.

The interior decor is contemporary, with midcentury classics like the Hay J110 chair paired with several Douglas & Company designs, including the Eileen Gray-inspired E1027 Credenza sideboard and pieces from the Mr Price Home range.

In the dining area, mismatched chairs surround a sizeable table. A simple pendant light is positioned overhead, while the pair's McSorley's Wonderful Saloon trolley sits alongside.

"The soft light provides an ideal habitat for our much loved houseplants, resulting in the trolley being filled with greenery rather than our favourite tipple," added Liani.

The kitchen boasts custom-designed units topped with a vibrant green marble. Here, a brick floor extends out into the courtyard.

Other recently completed residential projects in Cape Town include SOATA's Kloof 119A, a house with striking views of Table Mountain.

Photography is by David Southwood.