Alonso de Garay of Taller ADG designed the Italian restaurant to accompany an existing coffee shop that was also renovated for the project. Concrete features in both to tie them together, including board-marked walls that match polished concrete floors and the exposed ceiling.

In the restaurant called Sartoria a curved, board-marked concrete design wraps up over the dining space. Built-in wooden seating runs down either side of the arched form, and the backs are topped up with LED strips to light the vault above.

"The main idea was to create a vault that provided a sensation of warmth reminiscent of old Italian trattorias," said Taller ADG.

The 100-square-metre space can accommodate 25 people with wooden tables and chairs that are laid out in rows underneath the arch.

Additional dining space is provided by a concrete ledge topped with white Statuarietto marble that runs along the window front. Oak stools are placed underneath.

Wooden details continue into the rear of the restaurant, covering walls that conceal the kitchen and bathroom. Also located here is a bar and a wine cellar that holds 250 bottles, with wooden shelves backed with marble.

A glass partition separates the restaurant from the coffee shop called Buna, which was redesigned to complement the aesthetic of the restaurant. 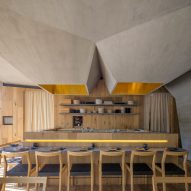 Details include a chunky concrete counter topped with black marble that echo the shape of a curved concrete wall at the back.

"Buna's space is solved by tilting the vault shape, generating a curved wall that provides a sense of continuity in such a small space," Taller ADG said. "A play of arches form the personalities for two different concepts."

Several lights accentuate the intimate, concrete interiors, including a tubular lamp by Belgian designer Vincent Van Duysen for Flos and a golden lamp also for Flos by Michael Anastassiades.

At the front of the restaurant are black aluminium chairs and tables by Italian brand Emu.

The city has a strong food scene with many beloved cafes and restaurants, including Rosetta and Panadería Rosetta, which are just around the corner from Sartoria. There is also the famed Mexican restaurant Pujol in the Polanco neighbourhood.