Dutch designer Richard Hutten clashed with the CEO of the Ellen MacArthur Foundation at the Dezeen Day conference last week, with the two speakers disagreeing over the role of plastic in the circular economy.

Hutten responded angrily to claims by Andrew Morlet, head of the circular-design advocacy organisation, that plastic can be used sustainably.

"Plastic in and of itself is an amazing material," said Morlet. "It's light, it's durable. If you've got a plastic bottle, you could keep that for 100 years and just keep reusing it."

He added that new chemical recycling techniques will mean the material can be recycled efficiently.

"We have an enormous amount of petrochem-based plastic in the system now," he said. "We need to focus on how to keep it in the system, keep it in the economy and out of the natural system. I think the technologies are coming with chemical recycling that will allow us to keep polymers [in use]," he said.

However, the Dutch designer disagreed. "That is such bullshit," he said.

"I'm sorry to say, I'm really getting upset," added Hutten, who described plastic as "the cancer of our planet."

"No matter what people are saying, that you can recycle it, that's bullshit," he said. "You cannot recycle it. There are 4000 different kinds of plastic. PET can be recycled a little bit all the other plastics cannot."

Hutten and Morlet were taking part in a conversation about designing for the circular economy at Dezeen Day, a one-day architecture and conference organised by Dezeen.

Morlet spoke about the Ellen MacArthur Foundation's plans to get 20 million designers to help transform the global economy from a linear model to a circular one.

Modern wastefulness was a "deliberate decision"

Morlet said that the wastefulness of the modern economy was deliberate, with companies deciding to make their products less sustainable in order to increase demand.

"Going back to the 1920s, we had at that stage a light bulb that would last until today," he said. "There was a deliberate decision by many of the industry at that time to shorten the lifespan of a light bulb to 1,000 hours. There was a cartel created to make that decision so that they could get more throughput and sell more light bulbs." 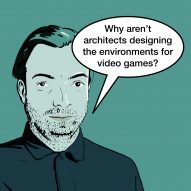 "Pretty much everything that we have in the economy today is designed for short lifespans and disposability," he added. "We're trying to recycle and recover materials that were never designed to be recovered, so the yields that we get from those types of activities are very low."

The circular economy requires a rethinking of the business model to eliminate waste and mimic natural systems, he said. "In the world where things grow and metabolise, how do we actually think about returning nutrients into that system and keeping those nutrients in flow as opposed to having them being flushed and lost from the system?"

"I will never design in plastic again"

Hutten talked about how he became committed to designing more sustainably a four years ago, when he sold his car and become a vegetarian. He travelled from Rotterdam to London for the Dezeen Day conference by train rather than by plane, to reduce his carbon footprint.

Hutten spoke about his circular-design projects, which include the benches he has designed for Schiphol Airport.

"I will never design in plastic again," he said, apologising for past plastic products including his classic Dombo plastic children's mug, which he designed in 2000. "We have to stop [using plastic]."

"The future isn't terrifying. It just needs to be better" says Paola Antonelli

The Dutch designer expressed anger that The Ocean Cleanup plans to burn the plastic it collects from the ocean.

"I was very disappointed when The Ocean Cleanup announced that they are going to burn the plastic they collect from the ocean with 'thermal recycling' as they call it," said Hutten. "That's greenwashing."

Dezeen Day took place on Wednesday 30 October at BFI Southbank in central London, with a sellout audience of 450 people in attendance. The circular-economy session was moderated by Dezeen's editor-at-large Amy Frearson.

The all-day conference kicked off with a presentation by Museum of Modern Art curator Paola Antonelli, who talked about design's role in creating a "beautiful ending" for humanity, which she believes is heading for extinction.

Hutten disagreed with her viewpoint. "Paola Antonelli mentioned that we are facing a mass extinction," he said. "That is f*cking true. I don't agree with that we have to design our extinction. I think we have to prevent it."

Hutten's comments about plastic recycling echo those of Jan Boelen, curator of last year's Istanbul Design Biennial. Speaking to Dezeen a year ago, Boelen described the trend for making products out of reclaimed plastic as "bullshit".

"I really, really think it's bullshit," he told Dezeen. "It's doing nothing. It's not changing the fundamental problem we have."

Instead, designers should focus on exploring alternatives made from materials such as algae.