Judges and VIPs joined architects and designers from all over the world at Ennismore Sessions House in London for this year's Dezeen Awards party.

J Mayer H, Vladimir Radutny Architects, i29 and Joe Doucet were among the project category winners that attended to collect their Dezeen Awards trophy designed by Atelier NL.

They were joined by Yinka Ilori, Nelly Ben Hayoun, Ron Arad and Yoko Choy who were all on the panel of 75 industry-leading professionals that judged Dezeen Awards this year.

A Room for Archaeologists and Kids by Studio Tom Emerson and Taller 5, Piazza Dell'Ufficio by Branch Studio Architects and Aguahoja I by Mediated Matter Group have been named best architecture, interiors and design projects of the year. 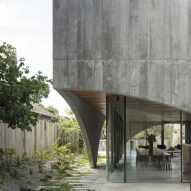 Emerging architecture, interiors and design studios of the year named at Dezeen Awards

They were revealed on the night by Dezeen's founder and editor-in-chief Marcus Fairs and head of Dezeen Awards Aísling Cowley.

The overall project winners were selected from the existing pool of project category winners selected during this year’s master jury day in September.

Photos are by Mark Cocksedge.