An outpost of a British fish and chip shop has opened in Chengdu, China, which creative studio Unknown Works has completed with a 3D-scanned facade.

Serving a quintessentially English menu of fish and chips, Scotts Taikoo Li takes its name from the Chengdu district it's situated in.

The idea to open the Chinese branch of the restaurant came after the president of China, Xi Jinping, visited the original Scott's Fish and Chips shop in the British county of North Yorkshire in 2015. His appearance consequently attracted a wealth of Chinese tourists keen to try traditional English dishes.

"[The facade] forms both an active space for restaurant-goers to inhabit as well as being the conceptual framework for the entire restaurant," it explained.

A series of 1.1 by three-metre doors form the shop's exterior, which can be pushed back to form an indoor-outdoor eating area that runs around the open kitchen. Each one is also subtly inset with a panel that can be flipped down to form a dining table.

The doors are crafted from glass-reinforced plastic and have been CNC milled to feature an assortment of ornaments typically seen inside English chippies, like salt and pepper shakers, hanging aprons, picture frames and menu boards. 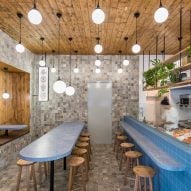 To precisely replicate the items, the studio journeyed to fish and chip shops around the UK – including Scott's – and captured their interiors with a Lidar scanner – a device that uses lasers to record and make 3D representations of a designated area.

Inside, the shop has been entirely clad in clean white tiles. Splashes of colour are offered by a couple of red neon signs and matching fold-out dining chairs, a nod to the hue of the original Scott's logo.

Food is also served to diners on circular red trays.

The studio hopes that it's contemporary reimagining of Scott's Fish and Chips will redirect conversations about China's reported copy-culture.

"Taking the notion of shanzai – a term describing the act of copying and imitation that is so often indiscriminately directed at Chinese commerce – this project aims to frame the discussion around the guises of what cultural exchange, dialogue and trade can take in modern Sino-British relationships," it added.

This isn't the only chippie that has popped up outside of the UK – back in 2017 Sans-Arc Studio completed a fish and chip shop in Adelaide, which features blue terrazzo, grey travertine and stained wood surfaces.