Simon Porte Jacquemus – with the help of hospitality-focused Caviar Kaspia Group – has designed Oursin to recall "the eternal summery beauty of the optical white house shimmering along the Mediterranean coast".

The restaurant is set on the second level of the BIG-designed Galeries Lafayette department store on the Champs-Élysées, a major avenue in Paris lined with luxury boutiques and eateries.

It's the second dining space that Jacquemus has created in the store, joining Citron down on the first floor – a casual cafe dressed with huge terracotta pots and lemon trees.

The focal point of Oursin is its rear wall, which is punctuated with a series of arched and rectangular alcoves. An array of organically-shaped ceramic vases are displayed inside, some of which boast colourful patterns or iridescent surfaces.

Dishes will be served in similarly unique plates crafted by artisans in Greece.

Against the back wall runs a gently curving banquette seat that's upholstered in sand-coloured fabric, complementing the light-hued rattan dining chairs that surround the other tables. 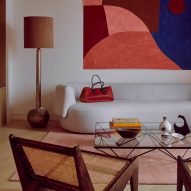 While the space is kept bright by its lime-coated walls, there is also an expansive pair of gridded windows that bring in additional natural light from outdoors and provide views of the busy Paris streets below.

A gnarled vine plant has then been placed at the centre of the room, its leaves winding across the ceiling over diners' heads.

Jacquemus established his self-titled label in 2011 and has since become popular amongst the fashion crowd for his simplistic silhouettes and micro-sized bags.

He isn't the only fashion designer to foray into the realm of interior design. Earlier this year Roksanda Ilincic overhauled a penthouse inside Gasholders in King's Cross, decking out the space in berry tones and ornaments from her favourite female creatives.

Back in 2018, British fashion designer Bella Freud also gave a retro fit-out to an apartment set inside the BBC Television Centre, complete with lacquered furniture and heavy coloured carpets.