Bjarke Ingels' firm has created a "retail laboratory" for French department store Galeries Lafayette inside an art-deco bank on the Champs-Élysées in Paris.

BIG sought to celebrate the history of the 1930s building, matching its original art-deco details with opulent displays.

But the space is designed to function as more than just a store – Galeries Lafayette sees it as hybrid retail model, which will be used for hosting fashion shows, brand events and other activities.

"The raw space has an almost urban scale and character that makes it capable of accommodating even the wildest interventions, which makes me excited to imagine what I might expect to find here next time I come back," said Bjarke Ingels.

"And it shows me that Galleries Lafayette is not only opening a new department store on Champs-Élysées, rather, they have opened up a new urban room for the Parisians," he explained.

The move will be a first for the brand, which started when Théophile Bader and Alphonse Kahn started selling fashion items from their haberdashery store on Rue La Fayette in 1895. It is now the city's most important luxury department store, with branches across France and around the world.

"Working with a family and a company that can look back 100 years gives you, not only the possibility, but actually the responsibility to attempt to look as far ahead as you can look back," explained Ingels.

"With the advent and omnipresence of online retail, the urban department store's role and relevance must be renewed as the urban agora," he continued.

"We humans are social beings and more than ever do we need a forum for collective intimacy, where we can't just get what we want by clicking on it, but where we can engage with others in urban environments that are visually and physically stimulating to all the senses."

The renovation involved stripping out the black-painted drywall that obscured the majority of the building's interiors, making space for a new focal point – a light-filled central atrium anchored by a sequence of chunky marble columns.

The rich material palette is continued with the ring-shaped display plinths that wrap around the columns, crafted from gold-hued sheets of perforated metal.

Dressing rooms are upholstered in thick pink fabric, while "magic carpets" that dip up and down from the floor help showcase different shoes.

Products in other rooms are presented inside tall stacks of hollow boxes and mannequin stands are clad in reflective mirror.

"To create an invitation to enter, ascend and explore, we have designed a handful of elements that find themselves at the intersection of architecture and furniture," added Ingels. 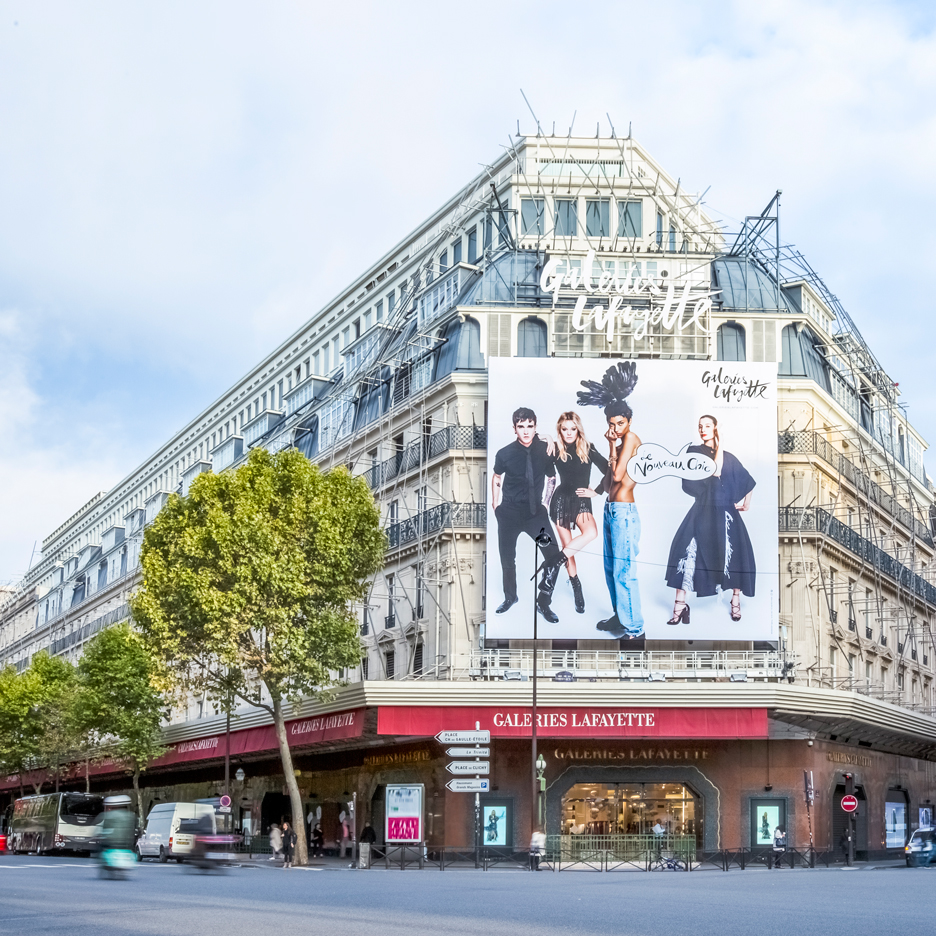 "Rather than messing with the old bones of the building or delineating function with walls, the programme has been provided with a family of pavilions that may change and transform over time."

The grand flight of stairs in the atrium – which can serve as staggered seating for in-store events – leads up to a further three floors where jewellery, special edition trainers and pieces from emerging fashion designers are showcased.

A restaurant named Oursin and a Parisian food court offers shoppers a place to rest and recharge. They can also grab a coffee at Citron – a lemon tree-filled cafe created by fashion designer Simon Porte Jacquemus.

Visitors can then exit the store via an illuminated walkway.

Galeries Lafayette is one of several projects that BIG has completed in 2019.

The practice also finished work on a vortex-shaped education centre that sits beside a fjord in the Faroe Islands and an extension to the University of Massachusetts which features "domino effect" copper walls.

The firm first announced it was working on the Galeries Lafayette project in 2016. The retail group is also working with other big-name architects on other projects, including OMA and Amanda Levete Architects.

"By opening on the Champs-Élysées, our group is not only writing a new chapter in its entrepreneurial and family history, it is also fulfilling its founder's dream," said Philippe Houze, executive chairman of the Galeries Lafayette Group.

"A dream expressed nearly 100 years ago on the corner of the Champs and Rue La Boetie, where in 1927 Theophile Bader planned to build a venue offering something midway between retail, services and entertainment," he continued.

"Almost 90 years later, we are delighted to pursue his grand design with a store concept that is both historic and disruptive."