A drawing of an imaginary fairyland was Wutopia Lab's starting point for the design of this cafe for children in Dalian, China.

Featuring a host of learn-play areas and whimsical decor details, the 580-square-metre Lolly-Laputan cafe is described by Wutopia Lab as "the first educational family restaurant in China".

"One morning my daughter was drawing out her dream fairyland and I really wanted to make that dream come true, so more kids could come and join in," explained Yu Ting, chief architect at the studio.

On the outside, the cafe's facade is covered with round, aluminium panels perforated with holes. Some overlap to form "ripples" or frame the building's various entrance points.

The front lobby is a circular room, where seating is surrounded by what the designers describe as a "forest of lights". Made up of 1,000 acrylic tubes hung in a ring-shaped formation, the lights are meant to simulate the effect of sunlight shining through dense layers of leaves in a forest.

The adjacent main cafe has a largely open-plan layout that revolves around a central area coined Cloudy Town – it's defined by rows of undulating white acrylic panels that run across the floor and ceiling.

Kids can run amongst the "clouds" and discover features such as a carousel, hidden tree-houses, slides and a ball pit.

Cloudy Town is also dotted with a series of house-shaped timber structures that contain miniature kitchen and supermarket playsets. 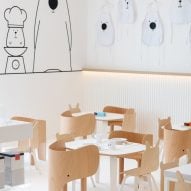 Grey panels line the outer perimeter of the room, which is used as a dining area. It's dressed with bench seats and armchairs upholstered in pale-blue fabric.

A number of enclosed private spaces provide a calmer environment for young visitors. These include a gallery-style space and a gabled structure with an arched front door.

Accessed via a short flight of steps and named the Golden Castle, the structure accommodates a quiet dining-area with a fireplace, artificial candlelights and shiny silverware, all scaled down to kid-size.

On the opposite side of the room, a red, velvet curtain can be raised to reveal a stage for performances. It's been finished with wooden flooring, neon lights and a dramatic crystal chandelier.

The restrooms are also imaginatively decorated – the girls' is inspired by candy floss, while the boys' is space travel-themed.

August of this year also saw Sneha Divias Atelier complete White & The Bear – a children's restaurant in Dubai that – instead of the expected primary colours – has been decked out in neutral tones that are meant to stop young visitors from becoming overstimulated.