Frank Gehry has completed work on the first stage in the major renovation of Philadelphia's Museum of Art, over a decade after he was first enlisted to design the project.

The museum opened a number of new elements to the public including the North Entrance – a street-level side entrance that was used when the museum opened in 1928 but had been closed off for 40 years – a new espresso bar, bookstore and restored vaulted corridor.

Completed in September, the features form the first stage of Gehry's Core Project renovation of the Neoclassical museum building, which broke ground in 2017 and is expected to complete next fall.

The Core Project is the first phase of the wider Facilities Master Plan that Gehry was enlisted to design in 2006. Additional phases will be instigated depending on time and budget.

Speaking to Dezeen at the opening of the museum's new spaces, the 90-year-old architect said working on the lengthy masterplan, which has taken 13 years so far, has required great persistence.

"Sticking with this project, I should give myself an A for perseverance," Gehry told Dezeen.

The Philadelphia Museum of Art was designed by American architects Horace Trumbauer and Julian Abele, and opened in March 1928.

Former museum director Anne d’Harnoncourt asked Gehry to develop a masterplan that would work within the existing footprint of the Beaux-Arts building, and open up spaces that were previously inaccessible or used differently over the years.

As part of the project, the Canadian-American architect is altering adaptations that have been made to the museum throughout its history, including interventions added by architects Robert Venturi and Denise Scott Brown in the 1980s.

"The story was here," said Gehry. "The bones were here. Anything that you would do that was self-expression would look trivial, so I just never entertained that possibility once I got into it." 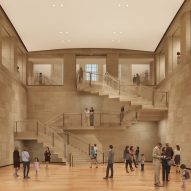 "The idea was to try and keep its integrity as what it was intended to be, and to create a way to use it in today's world," he added. "We also had a tight budget so you can't do what you want to do."

The North Entrance, which reopened with a newly designed bronze-and-Douglas fir visitor desk inside, reclaims 22,000 square feet (2044 square metres) of space in the museum.

"This moment marked an important milestone in the realisation of the museum's Facilities Master Plan – the reopening of architecturally significant spaces that have been out of the public eye for many decades," the museum said.

Before this, this first thing that was tackled was creating a new art-handling area and loading dock. "It was the right thing to do because it uncorked everything," Gehry said. "The next right thing was to get the auditorium out of there, so you could pull the cork out so it could all flow like it was intended."

Other aspects to join the street-side entrance are a new gift shop and digital signage developed by design studio Pentagram.

The museum's Vaulted Walkway, which is accessed on this side of the museum, was also restored. It is clad in Guastavino tiles with historic signage and a strip of LED lights overhead encased in bronze.

Elsewhere, existing stone walls have been cleaned and restored, along with wood Tiffany doors and existing Doric columns. In the side entrance is a new arch that Gehry added to accompany two existing openings in the stone wall.

New Kasota limestone paving on the floors was sourced from the same Minnesota quarries that provided the museum with floors and walls in the 1920s.

A new cafeteria and restaurant for the museum, staff offices, and redesigned galleries for Chinese art and South Asian art as well as the first of new educational studios are among other completed elements at the Philadelphia Museum of Art. Hallways, bathrooms and systems are also being added and upgraded in phases.

Additions to follow will be a second education studio, more revitalised existing galleries, and other redesigned entrance called Lenfest Hall.

In addition to the Philadelphia museum, which houses more than 240,000 objects over 4,000 years of history, Gehry has designed other notable museums and buildings including Guggenheim Museum Bilbao, Fondation Louis Vuitton, Luma Arles tower in France and Abu Dhabi's Guggenheim whose construction is set to begin.

Born in Toronto in 1929 to Jewish immigrants, Gehry studied architecture at the University of Southern California and city planning at Harvard University Graduate School of Design (GSD). He is based in Los Angeles and is an active supporter of arts education programme Turnaround Arts.

Photography is by Steve Hall.