Plywood panels and fabric curtains have been used by by Kooo Architects to transform an existing concrete structure into a guesthouse in Guangzhou, China.

The exterior has been clad with clad with grey and black bricks, which were reclaimed from the building that originally stood on the site.

The guesthouse is the second guesthouse Tokyo-based Kooo Architects has completed in the city for hotel chain Far & Near.

The first, a hotel on Nanaho St, involved a similarly light-touch retrofit of a rough concrete structure.

Four storeys in height, the interior of the existing structure was stripped back and reconfigured to provide 11 guest rooms.

There is also a common area for guests, which can be isolated from the adjacent corridor by drawing a large curtain.

Rather than conceal any of the existing structure, the rooms are framed by the large concrete beams and columns.

This concrete has also been left exposed on the floor in the entrance hallways, stairs and some small areas of the ceiling.

"Aiming to preserve the beauty of these existing concrete structures, we chose to expose them as part of the interior design," said the studio. 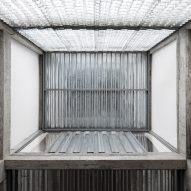 "We designed this way both to preserve the nature and the particular aesthetic of the original architecture, at the same time satisfying the low budget."

Meranti plywood panels have been used to create a datum lining the common areas.

In the bedrooms, a paler basswood ply has been used to cover walls, floors and ceilings, as well as creating built-in shelves and benches.

Slight alterations to the position and size of openings on the elevations were made to allow more light into the new rooms and improve the facade's visual proportions.

While some rooms have only small openings looking out to the street, others have full-height glazed walls.

Window frames are concealed behind the floors to appear invisible from the interior and increase the feeling of openness.

On the upper floor and in the stairwell long, narrow skylights cut through the concrete floor-plates draw light down into the interiors.

Kooo Architects, which has offices in Tokyo and Shanghai, was founded by Shinya Kojima and Ayaka Kojima. As well as the Nanaho St. Hotel, previous projects include a latticed-timber café in Hangzhou.

Photography is by Keishin Horikoshi.