Beirut studio T Sakhi redefined the wall as a hub for social connection with its pavilion for Dubai Design Week, which comments on the "resilience" of Lebanese society in the face of current socio-political unrest.

Sisters Tessa and Tara Sakhi from architecture and design studio T Sakhi were commissioned to create a pavilion for this year's edition of Dubai Design Week that would represent their Lebanese culture.

The result is the WAL(L)TZ installation – a 15-metre linear wall made from recyclable foam that has been penetrated with various openings and cracks that visitors can use to communicate with one another.

WAL(L)TZ was chiefly intended as a comment on the socio-political unrest in Lebanon, which according to the sisters has recently seen ongoing protests against government corruption and the structure of the political system.

The Sakhi sisters wanted to respond to the myriad of walls embedded in Lebanon's urban infrastructure, such as security barriers, barbed wires and fenced public spaces.

Small holes and narrow slits in the wall are designed to encourage visitors to interact by touching, holding hands, looking at each other and moving through or over the wall.

"When Dubai Design Week asked us to design a Lebanon pavilion, the first thing that came to our minds was all the obstacles we encounter on a daily basis in our country, whether political, economic, social or religious," the duo told Dezeen.

"As we are witnessing today the biggest Lebanese revolution in history, we can see a society that has put aside all its religious, cultural and political affiliations and beliefs to unite under one nation and one Lebanese flag," they continued.

"These obstacles are as likely to be physical as psychological," the designers explained. "Physical, because we cannot move freely in our country – one crammed with military barricades – and psychological, because we all wear social 'shields' or 'masks' as we engage and interact with one another."

As the designers explain, each visitor becomes a performer in a "choreographed protest" against oppression when interacting with the wall and other people through it. Tessa and Tara describe this as a "reinterpreted waltz", which gives the pavilion its name.

"It is all a question of how much you want to push yourself to go to the other side of the wall," they said.

The material of choice was foam as, firstly, it can be easily recycled, and secondly it is lightweight and porous – qualities that directly contrast to the rigidity and solidness of the concrete typically used to build walls.

This, according to T Sakhi, was to make it playful and for both kids and adults to touch, feel, and even remove pieces from it.

While WAL(L)TZ directly addresses the ongoing uprising in Lebanon, it also speaks more universally to the barriers faced by our current generation, the designers explained, which is dominated by technology.

The concept was born in response to the questions the Sakhi sisters found themselves asking, such as "How do we interact in today's world?" and "Are we intimate strangers?" 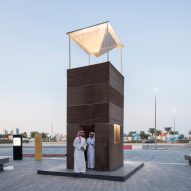 Placing iPads and mirrors in some of the holes was the designers' way of addressing our current, global "technological era" in a playful and satirical manner.

These items represent the virtual interaction between individuals that is made via screens, as a hint towards the "self-absorption of today's society".

The pavilion was designed as part of Abwab – the annual exhibition that takes part during Dubai Design Week.

Curated by Rawan Kashkoush, creative director of Dubai Design Week, the exhibition is dedicated to commissioning work from across the Middle East, North Africa, and South Asia in a bid to promote design talent from the region.

On display from 11 to 16 November 2019, WAL(L)TZ is one of this year's three national pavilions, which were all created in response to this year's theme of "ways of learning".

The Lebanon pavilion wall is a continuation of the studio's previous installations, which also tackle the concepts of interaction and connectivity.

Lost in Translation and Holidays in the Sun were two installations in Beirut that saw security barriers transformed into seating structures that encourage people to sit face to face.