Furniture made of crushed dates and a floor lamp created with fish scales salvaged from an Emirati market are among five projects featured in design platform Tashkeel's annual exhibition, which is on display as part of Dubai Design Week.

Each year, Dubai-based Tashkeel selects a group of emerging designers from the United Arab Emirates to produce furniture that is developed from concept to completion in nine months as part of its annual Taween programme.

Five designs were included in this year's edition that focused on innovative materials, such as a chunky console table attached to a rectilinear mirror by architect Sara Abu Farha and engineer Khaled Shalka.

The table is made from "datecrete", a concrete-style material developed by Abu Farha and Shalka formed from crushed dates.

According to the designers, datecrete is the world's first date seed-based cementitious material that features no traces of resin or concrete. The product makes use of local UAE date waste, where the fruit grows natively.

Tibrah is a floor lamp by Emirati architect Reema Al Mheiri that features delicate lampshades made of treated fish scales sourced from Ajman Fish Market, which would have otherwise been thrown away.

The architect explained that she was informed by local poetry for the lamp's design, which takes cues from a story about a fleet of dhows, or traditional sailing boats, travelling back to a port.

SKin is another lighting project featured in the exhibition. It is a ceiling-mounted LED light that is characterised by an undulating structure created from kombucha "leather" and wrapped in mesh. The material was grown by yeast and bacteria culture during a fermentation process.

"The bacteria protect its culture from external microorganisms by weaving a cellulose biofilm that floats on top, which is almost like skin," designer Shaza Khahlil told Dezeen.

"SKin came about during careful observation of the properties and behaviour of the material. When the biofilm is left under the sun to dry, it curls and folds in a unique way each time, similarly to a leaf," Khahlil continued.

"Hence the shape and the structure of the light fixture were derived from a dry plumeria leaf, also known as frangipani."

Other pieces include Kaseeriya, a low-slung brown-hued bench by designer Ebrahim Assur, which was created using recycled cork, camel leather and pallets made from Palmade – a biodegradable material developed in the UAE out of discarded date palm leaves. 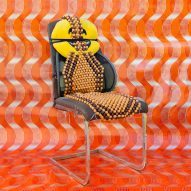 "While collaborating with engineers, scientists and manufacturers as part of [the 2022 designers'] journey of research and experimentation, participants developed fresh, functional designs that draw deeply on the nature and traditions of the UAE," she said.

Other projects on display at this year's Dubai Design Week include an installation by architecture studio OBMI, which features curved canopies that are designed to mimic Middle Eastern mangrove forests.

The images are courtesy of Tashkeel.

The Tashkeel projects are on display at Downtown Design as part of Dubai Design Week, which takes place from 8 to 13 November 2022 in Dubai. See Dezeen Events Guide for an up-to-date list of architecture and design events taking place around the world.