Kazakhstani designer Enis Akiev has developed a method for turning single-use plastic packaging into tiles, by emulating the organic process of rock formation.

Metamorphic rocks such as marble develop their flowing, irregular patterns through heat and pressure, and Akiev's Plastic Stone Tiles are subjected to similar conditions to achieve the same effect.

"First, I collect household plastic waste ​from trash-sorting facilities," Akiev told Dezeen. "Then I sort it by colour and type of plastic before washing and drying it. Finally, I melt it in an oven so that I am able to press it into a form, cut it and sand it."

"Through heat, movement and pressure – much like in rock formation but in a much lighter approach – I am able to achieve very similar structures," she continued.

This process lends itself to the creation of a vast range of different coloured tiles, featuring as many shades as can be found in the packaging itself.

"The colours are created entirely through sorting the waste into matching piles," explained Akiev, who is a graduate of the Köln International School of Design.

"There is no additional colour or binder added, and the patterns come from the way I layer and form the plastic foils."

The idea to subject plastic to conditions that are similar to those in nature, came from Akiev's realisation that plastic can never really be thrown away because, as she explained, "there is no away".

It simply goes somewhere else, out of sight, whether that is into landfill or our oceans.

As she began to dig into what happens to the material at this stage of its life, she came across a report from the Geological Society of America, announcing the discovery of a new "stone" called plastiglomerate.

It was first found on a Hawaiian island in 2013, after a volcanic eruption had melded plastic waste with its surrounding natural materials such as rocks, sand and lava fragments. 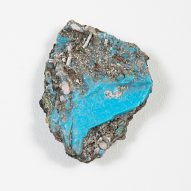 Chunks of the material found on a beach on the island were shown by Kelly Jazvac in the Broken Nature exhibition at the Milan Triennale curated by Paola Antonelli.

With her tiles, Akiev offers a riff on this theme in the hopes of helping us reconsider a material that is often seen as having no history, which is discarded after a single use, as one that shows the marks of a long life, lived after we discard it.

"I aim to raise the value of the material and want to showcase its own intriguing aesthetic," she explained. "So in a way, every tile is an art piece and I hope it will be treasured and kept for a long time."

Plastic has been a widespread concern among designers this year, with projects either finding new applications for plastic waste or, on the other end of the pipeline, hoping to replace the material all together with more sustainable alternatives.

This year's James Dyson award winner Lucy Hughes, for example, has created a fully compostable bioplastic out of fish scales and skin.

Meanwhile French designer Dorian Renard, much like Akiev, hopes to make us reconsider our throw-away culture by creating a high end collection of sculptures furniture and out of plastic that was blown like glass.