Brenda Smith began her career as a nurse in New York, but now leads healthcare and hospital projects at global architecture firm Perkins and Will. She explains how she got there for the Dezeen Jobs careers guide.

Smith is responsible for overseeing all healthcare projects and strategies for Perkins and Will's New York studio. This involves connecting the work of the firm's seven research labs to the daily design and planning of the New York office.

Before becoming an architect, Smith was a practising oncology nurse. After enrolling on various night courses, Smith found her way to architecture and interior design, and "immediately felt at home".

"While I enjoyed both the technical and the problem-solving aspects of nursing, I had this strong need for creative exploration and expression that wasn't possible within the rigour of healthcare," she explained.

"For me, design is the obvious balance between technical rigour and creative expression and exploration."

While studying interior design at Pratt Institute in New York, Smith continued to work as a nurse on weekends until her third year, where she worked 30-hour weeks at a local firm on interior projects in the finance and banking industry.

"It was a great place to get started," she recalled. "Because they were relatively small, I got exposed to all aspects of what we do – and quickly."

After building a career in interior design, working on commercial projects, as well as some clinical and laboratory work, Smith decided to seek new opportunities. 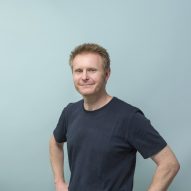 Her first experience in healthcare design was a sizeable project that involved managing the design process of a three-campus expansion, which comprised over 90 phases and 2 million square-feet of space.

"I thrive in the midst of complexity," said Smith. "Rather than being overwhelmed by the scale or the timeline of the project, I was able to take in the whole horizon of the project and organise the effort into a manageable flow of work, keeping the team focused on the right priorities at the right time."

Smith said the project had a formative impact in shaping the rest of her career, expounding that her experience as a nurse and designer made her "a natural translator between the architecture team and the healthcare staff".

"I understood both of their worlds and could easily facilitate the project development and design process between the end-users and care-providers," she explained.

Smith reflected on the similarities between nursing and design, explaining that "both roles depend on teamwork to solve a conflict that doesn't have a simple or straightforward solution".

"Most importantly, both roles are focused on making people's lives better," she added.

She soon joined Perkins and Will as the team leader for healthcare interiors at its Atlanta office, working on large projects in the Middle East, including five hospitals in Saudi Arabia – one of which is dedicated to neuroscience.

She has continued to progress in her role specialising in healthcare projects, leading various medical and health-science education programmes firm-wide.

She now works with a team of 20 design experts in the New York studio, including architects, interior designers, strategists, and healthcare and operational planners.

Smith explained that opportunities that "stretch" her are what keep her motivated: "I'm energised by learning – both about my craft and myself."

"We humans are at our most vulnerable when our health is in question, and that vulnerability can open us up to profound moments with those around us," she said.

"I find it deeply meaningful to create spaces that support healing and health, and make room for those moments."