Squirrel Park is a scheme of four houses made from converted shipping containers in Oklahoma City, USA, by Allford Hall Monaghan Morris.

Built on a budget of $1.1 million (£850,000) for a developer client who plans to live in one of the properties, Squirrel Park has four two-bedroom homes on a 2,500-square-metre site.

"The owner, who runs a local restaurant where the staff is made up largely of individuals who have been incarcerated, believes in second chances as 'a way of giving back to the community'. This became a guiding principle in the design," said AHMM.

"The goal was to take a vacant site that had been a magnet for crime and transform it."

A total of 16 lightly used steel shipping containers – which had "been around the world once" according to AHHM – were used to make the four houses.

The three family homes not occupied by the developer will be rented at "competitive market rates".

Two containers make up the ground floor of each house, with two more cantilevered three metres over one end to create a sheltered porch below and a first-floor terrace off the master bedroom.

Oklahoma has a hot climate, so the steel containers have been painted white to reduce heat gain, while mirrored strips reflect the sun's glare.

As the site is low lying, the houses have been raised on pile footings to allow more surface drainage, with planted areas arranged to catch and absorb rainwater runoff.

The area is also prone to tornados, so the containers have been reinforced with steel tubes and welded down to embed plates in the foundations.

There is also an eight-person tornado shelter located beneath Squirrel Park.

Inside, the shipping containers have been converted into habitable spaces with a metal stud frame 2.5 centimetres off the steel frame encased in just under 13 centimetres of sprayable insulation foam. 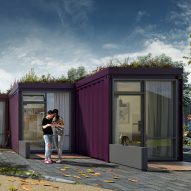 "The extremely tight exterior envelope and high degree of insulation allow a significant reduction in tons of cooling when compared to a conventional wood-framed single family home," said AHMM.

Separate thermostats have been installed in the upstairs and downstairs levels to give occupants greater control over the temperature.

Large windows have been punched into the steel shells to give every room an opening for light and breeze.

On the ground floor of each house there's a kitchen and bathroom off a hallway, with a full-width living space at the back that opens on to a private patio. Front porches with swing chairs provide shady spots for residents to sit.

Upstairs the two bed rooms are at either end, with bathroom in between.

Mature trees already growing on the site were left alone and 10 more trees have been planted.

Old horse troughs have been repurposed as planting beds for the communal green area, which also features benches and a water feature.

A shared carport marks a shared entrance to the housing development.

There is space for the carports to hold solar panels, and the roofs could have trays filled with native grasses on them to turn them into green roofs in the future.

Shipping containers have been utilised by architects to create a variety of projects around the world. In the USA, JBAD repurposed a shipping container into a parking attendant booth in Columbus, Ohio, while MB Architecture used the modular units to create a media lab at Bard College in New York's Hudson Valley.

Other recent projects that have used shipping containers include a hotel and wine bar in London, a marble-lined micro-home in Brazil and a drive-through Starbucks in Taiwan.