Buyers can borrow pieces of furniture from this pop-up shop, which online sharing platform Harth has opened in north London.

Founded by editor Henrietta Thompson and her husband Edward Padmore, Harth allows customers to rent design-focused furnishings, accessories, and artworks instead of disposing of them once their tastes or living circumstances have changed.

The House of Harth pop-up store is the first physical retail-space for the online platform, which launched its website back in June 2018.

"We were often asked if we had a showroom or space where people could see the pieces in real life, but as we are a platform and don't hold stock, it didn't seem to make sense at first," Thompson told Dezeen.

"However when the opportunity came up to collaborate with Islington Square we began to rethink the idea and quickly saw that we could stage a concept store and events space that would allow us to really refine our model, meet and talk to our borrowers face to face," she continued.

"We're also really looking forward to using the space as a forum for discussion about the future and the sharing economy."

The temporary store takes over a two-storey unit in Islington Square – a complex of restaurants and independent boutiques that sit on the grounds of an early 20th-century postal sorting office in north London.

Design studio Campbell-Rey was brought on board to give the space an "eclectic and surprising" fit-out.

"We have such a mix of different styles and periods on Harth so we wanted the space to reflect that, while also conveying the playful, experimental and fun side of the brand," explained Thompson.

"When you aren't making a 'forever decision' you can be a lot more free in your choices so we always wanted the store to be a mix of stories, statements, vintage and contemporary items."

On the ground floor, which serves as the main showroom, furnishings have been arranged in a series of living room-style set-ups that show off products in a homely context.

Pieces from brands including Studio Knot, Gufram, Richard Brendon and Joyce Wang Studio will be on offer. 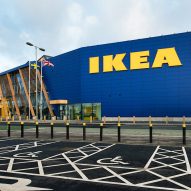 While a majority of surfaces have been painted in rich tones like sea-green, sapphire-blue and sunny yellow, a couple of walls have been covered in busy patterned wallpapers that depict tropical foliage and birds.

A black staircase leads up to the first floor that accommodates a co-working space called Harth Hub.

The room is dressed with a handful of pieces from At Work, a collection of office furniture by Established & Sons that takes design cues from comfortable, residential-style pieces.

House of Harth will be open to the public until February 2020. Thompson believes that the pop-up is the start of a wave of companies adopting a less wasteful approach to consumption.

"As the first to do it in this sector we know that we are being closely watched – the way we are consuming things is changing really quickly. And as retail moves to a more experiential, destination type model the shift will become even clearer," she added.

In February this year, IKEA revealed that it's going to start renting furniture. While the service will initially be limited to office equipment like desks and chairs, the Swedish company hopes it will eventually be able to start leasing kitchen suites and other large items.

Last year also saw Japanese brand Kamarq release a range of colourful furnishings that customers could rent on a month-by-month basis – however, the designs were almost immediately pulled from the market following a slew of plagiarism accusations.