In our latest competition, we're offering five readers the chance to win a copy of London's Great Theatres by Simon Callow with photography by Derry Moore.

Published by Prestel, the book offers a glimpse behind the curtain of the city's renowned stages and to see the spaces without crowds.

From the West End to east London, actor and director Callow offers his insights into 28 iconic theatres.

Apollo Victoria's auditorium is lined with pilasters with concealed lighting which bloom into tiered funnel-shaped capitals.

In keeping with its art deco features designed by William Edward Trent, additional lights glow behind seashell-shaped fixtures on the walls in between.

"The auditorium plunges you into a subaquatic wonderland in Art Deco style," Callow writes in his annotation.

"Lit in pale blues and greens and adorned with naughty mermaids, it was as sumptuous and sexy as any of the great Los Angeles movie palaces."

The authors challenge some eagle-eyed readers to spot features such as Trent's art deco mermaids, which would often be overlooked or hard to see past the crowds.

In a chapter later in the book, the authors shine a spotlight on the proscenium arch of the Playhouse theatre, which as Callow explains, hides "remarkable stage machinery" that is rarely used and therefore not seen by the public.

In the centre of London, the purple seats of the National Theatre's Olivier stage shine against the dimly lit space. The production crew can be seen working on stage, building a set.

Wilton's Music Hall, a Grade-II listed building in Shadwell, is also featured in the book. Known for its architectural heritage and high level of preservation, the photography highlights its history. 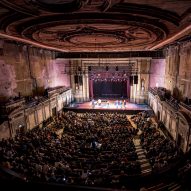 "Walking into Wilton's is an emotional business," reads the print.

"It catches at the throat; it gets the pulse racing. In ways hard at first to define, it seems to embody the particular excitement of theatre."

Throughout the book, Callow and Moore hone in on smaller architectural details including the Sock and Buskin masks – the comedy and tragedy masks widely associated with theatre – carved into pillars at the Palladium.

Five winners will each receive a copy of London's Great Theatres, which is also available to buy online.

Competition closes 18 December 2019. Five winners will be selected at random and notified by email, and his or her names will be published at the top of this page.