Four design industry events that were set to take place in Hong Kong over the coming weeks have been cancelled due to continuing clashes between protestors and police in the city.

The annual Business of Design Week (BODW) Summit, the Design for Asia Awards, the Fashion Asia Hong Kong programme and the deTour design festival have all been cancelled.

The most high-profile event to be called off was the 18th annual BODW Summit, which was due to feature more than 70 speakers across 20 forums from 2 to 7 December.

With the UK as this year's partner country, the summit was set to play host to the largest ever delegation of British designers and architects to Hong Hong. Led by London Design Festival chairman John Sorrell, the delegation was due to include Thomas Heatherwick, Tom Dixon and Deyan Sudjic.

Dezeen was set to be a media partner for the event, with chief content officer Benedict Hobson scheduled to take part in a panel discussion.

Hong Kong Design Centre, the organiser behind the BODW, Design for Asia Awards and Fashion Asia Hong Kong events, issued a statement last week in which it blamed "the current situation in the city" for the cancellations. It promised full refunds for anyone that had bought tickets.

Transport disruption is a problem

A key factor contributing to the cancellations has been the demonstrators' increased targeting of Hong Kong's transport system in a bid to cause as much disruption as possible, according to the deTour design festival event organiser.

This has caused logistical struggles for events like deTour, which between the 29 November and 8 December was set to feature a series of installations, exhibitions and workshops taking place across the city. 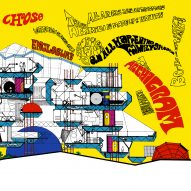 "The sudden roadblocks and subway closures are making it very difficult for people to travel to different venues for events," deTour's curator Shin Wong told Dezeen. "And in terms of construction, it is getting impossible to ensure that all the work is set up properly and on time."

"This is unfair to all parties – to our staff, to the creators, and to the visitors," she continued. "For us it's about getting the maximum exposure for participants, which they're not getting right now, so we had to make a call."

The cancellations were announced last week. The previous weekend saw the start of a violent standoff between police and student protestors at Hong Kong Polytechnic University, with around 1,500 tear gas canisters fired and a thousand demonstrators arrested or identified.

"A lot of our co-creators are alumni of Poly U, so it seems really insensitive for us to move forward with our usual events while those kids are at war," said Wong.

"I think it would really sadden a lot of the students who actually come to our events. So in a way, postponing them is a show of support."

Technology conference pushed by a year

The clashes look set to have long-term implications for the design industry in the region.

It was announced earlier this month that Rise, one of the largest technology conferences in Asia, which was scheduled to take place in Hong Kong in March 2020, would now be postponed by a year until 2021.

A statement by parent company Web Summit explained that the "number one concern is the wellbeing, safety, and security of attendees at our events".

Despite violence being contained to specific areas, with the rest of the city remaining largely safe, August saw Hong Kong visitor numbers reach their lowest point in 16 years while retail sales dropped by 18.3 per cent in September.

"A lot of designers' shops are not doing very well because nobody has really got time or they've got more important things to worry about than shopping," explained Wong. "And it's a chain reaction from there to the events."

Among the other high-profile events to be cancelled is Clockenflap, the city's largest music festival,  and the Hong Kong Open golf tournament.

However the Hong Kong Design Trust Gala took place as planned at the end of October, featuring an Archigram installation exploring the future of cities.