Norman Foster's studio turned the typical airport layout upside down with its 1991 Stansted Airport, which saw the high-tech architecture style applied to aviation for the first time.

The project saw Foster's studio turn the typical airport layout upside down by placing all of the services underground, instead of on the rooftop.

Beneath the roof, which is supported by structural trees, the airport's main concourse is a large, flexible, naturally-lit space. The layout places all the building services including the baggage and handling and a railway station, on the lowest floors.

All passenger services, such as check-in, security and departure, are arranged across the ground floor in a way that harks back to the simple, earlier terminal designs.

"Stansted Airport challenged all the rules of airport terminal design," said Foster + Partners, which was known as Foster Associates when the building was completed. "It went back to the roots of modern air travel and literally stood conventional wisdom on its head."

"The earliest airport buildings were very simple: on one side there was a road and on the other a field where aircraft landed into the wind."

Large expanses of glazing wrap the airport terminal to allow travellers to view planes taking-off while they move through the building. Passengers are then transported by shuttles from the main terminal to slender remote satellites.

"The route from land side to airside involved a walk from your car through the terminal and out to your plane, which was always in view," the firm explained. "Stansted attempted to recapture the clarity of those early airfields, together with some of the lost romance of air travel."

The roof's visible structure – a feature of the high-tech architecture style, which emerged in the 1960s and celebrated structural expression – is part of the airport's identity.

"The structure in general, and the roof structure in particular, give an identity to the building," said the studio, which worked with engineer Peter Rice to design the building. "The quality and refinements of its details are fundamental to the architecture."

The roof is held up by 36 trees. Each of them has a trunk made up of four, 12-metre-high columns placed at the corners of a three-metre square.

From this trunk four branches, linked by slender tension-members, extend diagonally from the top of each to support the roof at points that mark an 18-metre square.

This square forms the base of the lattice-shell domes of the roof. Each has four triangle-shaped rooflights in the peak, which is 15 metres above concourse level. White, perforated metal reflectors that match the triangular shape of the openings are suspended from wires underneath to diffuse natural light in the terminal.

Artificial uplighting was placed at the top of each tree to light up the domed roof at night time, with the reflectors diffusing light to the floor below. The trees are also used as the vessels to transport all the service distribution systems from the floor underneath. 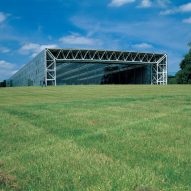 The terminal building has undergone a number of alterations since it first opened to the public to follow changes in procedures. Last year, Pascall+Watson was selected by the airport to oversee a transformation of the building, which includes a new arrivals terminal.

High-tech architecture is credited as the last major style of the 20th century and one of its most influential. Foster formed part of a group of architects – including Richard Rogers, Nicholas Grimshaw, Michael and Patty Hopkins and Renzo Piano – that led the style.

His other key projects include the Renault Distribution Centre in Swindon, one of the most expressive and distinctive examples of the style.