"The overall concept for Parc.1 was to create a new destination in Seoul with a complex that integrates public transport, retail, commercial and hotel accommodation to form a new urban hub," explained the practice.

"Central to this concept was to establish a series of buildings which create a hierarchy of public spaces, including tree-lined boulevards and plazas for public events," it continued.

The office towers occupy the northwest side of the site and the hotel the southeast, with the lower volume of the shopping centre in the centre wrapped by planted public boulevards.

Alluding to the late Richard Rogers' role as a founding figure of Britain's high-tech movement, the building's steel structures have been expressed externally, allowing for the interiors to be largely column-free.

The bright red paint used to finish this steelwork, as well as the pitched roof sections of the shopping centre, were both informed by traditional Korean architecture. 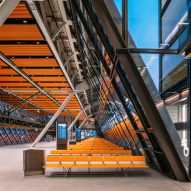 "The mixed-use scheme is marked by its striking exterior, inspired by red columns symbolising dignity and refinement in traditional Korean architecture," said the practice.

The shopping centre's interiors, designed by Leonard Design Architects, are cut through by a full-height void positioned beneath three large, pitched skylights.

The sweeping, stacked shop floors are all lined with balconies to overlook this void, and are topped by open, greener areas for visitors to dwell and relax.

"Staggered voids allow the light through each level to create a diverse and memorable experience," said the practice.

In the hotel, a full-height skylit atrium is punctuated by more large red steel columns, with bridges connecting areas either side containing lounges and rooms, culminating in a rooftop restaurant.

The office spaces prioritise flexibility and natural light, with their column-free design allowing for easy adaptations in the future.

RSHP was founded in 1977 by the architect and high-tech architecture pioneer Rogers, who passed away in December 2021 aged 88. The studio was known as Richard Rogers Partnership until 2007, but was renamed to reflect the contributions of the studio's partners Stirk and Ivan Harbour.

Other projects recently completed by RSHP include the Aile Est airport terminal in Geneva, Switzerland, designed as a modular "kit of parts" that can be easily disassembled or extended in the future.

The photography is by Kyung Roh.