Odile Decq has revealed visuals of a tower wrapped with sinuous red and white balconies in Barcelona, Spain, which will be her first residential tower.

Designed by the French architect's eponymous firm Studio Odile Decq for a site beside the Telefonica tower by EMBA, the 28-storey Antares will contain 89 luxury apartments.

Its undulating form created by the envelope of balconies is intended to be "a distinctive architectural statement", while complementing the organic forms of some of the city's most notable buildings.

"Barcelona has never been for me a strictly rationalist city. It has a colourful baroque soul with a deep history in art and architecture," Decq said. "Organic forms are ingrained in the architecture of the city," she told Dezeen.

"This fluid impression adds to the city's dynamic skyline while still being well proportioned and sophisticated. The form is not overly dramatic, it doesn't scream for attention, but you know when something is special. It just looks right."

Once complete, the top levels of Antares will be red. Red was chosen by Decq as it "is the representative colour of Barcelona and also "representative of [her] energy and passion in architecture".

It will also subtlety decrease in width with each storey using the method of entasis. Commonly seen in Greek architecture, entasis is a visual trick that was used to make the shafts of columns appear straight.

"The Greeks used it [entasis] on their columns and I used it to form the building," explained Decq.

"The change is subtle but as the undulating limits of the balconies expand around the corners and tighten in the middle of the building, the plan of each level changes as well," she continued.

"As the building rises, each level is not the same. There is a lateral translation when going up; it slowly pinches, using the same curvature formula as the ancient Greeks."

Visitors to Antares will be greeted by a grand triple-height lobby on the ground floor that features a curved green wall, which will extend out into a private garden. 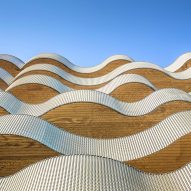 The tower will contain a mix of one to four bedroom apartments, duplexes and penthouses that will range from 98 square metres to 386 square metres.

Like its exterior, all of the apartment's internal finishes will be developed by Studio Odile Decq with fluid and organic forms, including custom-designed kitchen islands and baths.

They will be designed to prioritise outward views, and feature floor-to-ceiling windows and spacious terraces that provide residents with panoramic views out over the city or Mediterranean Sea.

"The interior finishes are in total correspondence with the spirit to the building; this is what I call a global design," said Decq.

"Here, the global design is dedicated to free forms, to open the spaces and to the outside. It focuses largely to the sky and to the sea, the mountains and the city itself," she continued. "In fact, it is hard to draw the difference between the interior and exterior finishes, because the limits are so loosely defined."

Antares' apartments will be finished with white walls and ceilings teamed with bamboo timber flooring, and will be fitted with intelligent home systems controlled by smartphones.

Construction on the tower has already begun, with completion scheduled in 2020. Once complete, it will also include a restaurant, cinema, gym, spa, and rooftop terrace with an infinity pool.

As well as heading up her eponymous studio, Decq is the founder of Confluence Institute architecture school in Paris.

She is also known for promoting the role of women in architecture, for which she won RIBA's Jane Drew Prize in 2016. In 2018 at the Venice Architecture Biennale, Decq demanded gender equality in architecture and called for fellow female architects to "fight against harassment, against discrimination".

Other projects by Decq featured on Dezeen include the renovation of Antti Lovag 1970s bubble house and the design of the new wing at Museo d’Arte Contemporanei di Roma.