Curated for the first time by Eleanor Watson from London's Design Museum, the show was organised into five sections: the human, the home, the community, the city and the planet.

Watson describes these sections as "the spheres where innovation can create a positive impact."

According to the curator, the show's structure was based on a 1977 film by Ray and Charles Eames called Powers of Ten, which imagines the universe as "an arena of both continuity and change".

The film begins with a close-up shot of a man lounging on a picnic blanket in a park. The camera then pans out gradually, metre by metre, to the power of 10 every 10 seconds until it reaches the universe.

"I thought this was quite a neat way of communicating the fact that all of these designs operate on different scales, and they have different spheres of influence," Watson told Dezeen. "There are many, many small actions that come together to create a total picture." 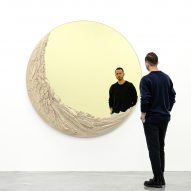 Watson channelled her experience of having worked on the Beazley Designs of the Year exhibition – which includes nearly 100 innovative designs from clothing and buildings to apps and homewares – when organising the show.

"Group exhibitions are always challenging because you have so many disparate ideas, and you need to bring them together in a way so that people don't feel overwhelmed when they come in," Watson explained.

"The great pleasure of working on an exhibition like the Global Grad Show is that you get to be confronted with a whole host of issues that you hadn't even realised existed," she added.

Read on for the curator's selection of one project from each of the show's five sections:

The Human: Swiv by Jenna Borges, Victoria Fishman and Kevin Paroda from the University of Pennsylvania

"The first section of the exhibition is titled the Human and looks at a variety of products and services that affect users on a purely individual level.

"People with a cognitive disability often struggle to become independent in their daily self-care, particularly with regard to oral hygiene. As mundane as it may seem, brushing your teeth properly requires a series of physically complex movements and considerable coordination, and the difficulty of this task means that people can become frustrated and give up on doing it themselves.

"Swiv is a new toothbrush design that radically reduces the complexity of brushing, offering a pivoting brush head with bristles that cover every surface of the tooth simultaneously. During use, the brush is moved along the teeth like a train riding on a track, one complete motion from left to right ensuring that every surface of each tooth is covered. Effective brushing becomes easier to perform as well as easier to learn."

The Home: Familie Hempel by Marie Radke from University of the Arts Berlin

"The nature of the home is changing, whether it be connected, nomadic, micro, off-grid. The projects in this section explore how we can make the most of these spaces, highlighting both the potential and pitfalls of the domestic sphere.

"A good example of that is Familie Hempel by Marie Radke. The main reason that I selected this project is just that it made me smile – there's something really joyful about it and I appreciate the designer's easy sense of humour.

"The premise of the collection is very simple – the designer noticed that in every household, there is a chair whose sole purpose is to be piled with clothes, worn but not quite ready to go to the washing machine. While typically seen as a sign of mess, she thought it would be good to acknowledge the ubiquity and value of this part of the domestic landscape, creating a series of chairs that accommodate and celebrate the chaos of our daily lives.

"The title is inspired by an old German saying – 'Your room looks like the Hempel family's place!' – which is apparently something that parents shout when a child has made a mess of their room."

"The projects in this section look at the needs faced by different communities across the world, but also how design can be used to foster better connections between people.

"After the Ebola outbreak in 2014, USAid sent out an open call for designers to come up with habitation solutions for patients and healthcare workers. A major issue with emergency tents currently in use across the African continent is heat, however the fact that tents are portable, lightweight and inexpensive means that they are the housing option of choice in these types of situations.

"Grace Nakibaala and her team at Makerere University drew inspiration from local building practices in Uganda to create a tent that passively cools itself. Mesh windows and an exploded roof allows cool air to enter the tent and hot air to escape through the top of the structure, lowering the internal temperature by 10 degrees celsius and reducing the humidity level by 95 per cent.

"The mesh windows also allow the patients to see what is going on outside while maintaining privacy, creating a sense of connection with the outside world and relieving some of the psychological stress of being under quarantine."

The City: La Butinerie by Christelle Zheng from University of Paris-Saclay

"Increasing numbers of people are growing up in and living in cities, taking part in a complex network of shared resources. The projects in this section explore how we can make the most of living at high-density, from maintaining clean air to fostering civic values.

"A great example of this is La Butinerie by Christelle Zheng and her team. Intensive farming and monocultures have wiped out a vast proportion of pollinating insects' natural habitats. As counter-intuitive as it may seem, cities are now safer places for these insects to live in than the countryside, as the urban air is largely free of pesticides.

"La Butinerie responds to a pending insect migration by providing a safe habitat for a variety of pollinating insects within urban environments. Similar to a large circular pot, it includes above-ground and underground habitats equipped with a camera and thermal sensors for monitoring. The project is part of the Biodiversity Plan launched by the City of Paris in 2018."

"It'll come as no surprise that one of the most persistent themes in this year's edition was the climate crisis, and the role that design has to play in ensuring that we make better use of our finite resources.

"A very nice project within this section is Raiki by Catalina Lotero and a multi-disciplinary team at Keio University. The team have been experimenting with how to take advantage of the triboelectric effect in plants, where small amounts of energy are generated when the leaves on a tree come into contact with the bark and then separate again.

"Using synthetic biology, the team have developed a leaf that optimises this contact, allowing one tree to generate 103 kilohertz per hour. The idea is that the energy is then conducted through the tree's trunk and into a battery, with the hope that one tree would be sufficient to power seven houses."