Norwegian architect Snøhetta has pledged to only design carbon-negative buildings, meaning their projects will generate more energy than they consume over their lifetime.

The firm plans to make the shift over the next 20 years. Snøhetta co-founder Kjetil Thorsen said the firm was making the move because the need to respond to climate change "feels so bloody urgent".

"For the next 10 years Snøhetta will focus on turning our project portfolio carbon neutral in terms of all projects in the design stage," the firm told Dezeen. "Within the next 20 years [we will] ensure that our built projects are carbon neutral"

The move will mean that all their buildings generate enough energy to compensate for carbon emitted during the production of building materials, construction, operation and decommissioning at the end of the building's life.

"For the next 10 years, we have the ambition of having projects on the table that will become CO2 negative in the cradle-to-cradle definition," said Thorsen. "This means we have to understand the embodied energies and all the materials used."

The announcement follows the completion of the Oslo-based architect's Powerhouse Brattørkaia building, which is designed to be carbon negative over its 60-year lifespan.

It comes as architects wake up to the huge environmental impact of buildings and explore ways they can be beneficial to the planet.

Stirling Prize-winning architects Mikhail Riches declared last month that they will only work on zero-carbon projects from now on. However many architects believe the profession needs to aim beyond carbon neutrality. Michael Pawyln of climate-change movement Architects Declare has called for a new generation of regenerative buildings that give back more than they take.

Snøhetta estimates that 85 per cent of a building's carbon emissions are generated by materials and construction, with just 15 per cent produced over the building's operational lifetime and during decommissioning.

"In order to become CO2 negative after a certain period of time, you have to start producing energy from day one, repaying the carbon debt that which you had at the day of the opening," Thorsen told Dezeen. "You have to start paying back by producing clean energy."

With today's photovoltaic technology, buildings need to be operational for around 60 years before their solar panels have generated enough power to pay back all the carbon emitted over the building's lifetime. 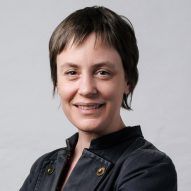 Sixty years is currently "the best you can do," Thorsen said. It takes around six years to pay back the embodied carbon in the solar panels themselves, he added.

With current photovoltaic technology, carbon-negative buildings need to be sculpted to maximise the sunlight that hits them. The wedge-shaped Powerhouse Brattørkaia building has 3,000 square metres of photovoltaics on its sloping south-facing facade.

A second Powerhouse building, called Powerhouse Telemark, is under construction in Porsgrunn, south-eastern Norway. This is shaped like a diamond to make their most of its photovoltaic cladding.

Nanotechnology could soon be used to make panels with micro-scale 3D surfaces that capture more sunlight than today's flat panels, he said. They could generate power for longer periods and buildings would not need to be shaped to maximise exposure to sunlight, since the panels would be effective regardless of the angle of the sun.

These panels would be less carbon-intensive to manufacture, and could have built-in batteries to store power, Thorsen said.

"The whole architectural scene has been waiting for nanotechnologies to actually get to a point where we can get more efficient for solar-panel electrical production," Thorsen said. "Nanotechnology seems to be the way forward with much lower embodied energy in the production."

Nanotechnology could also see the development of wafer-thin batteries that are printed onto the same cladding panels, he said.

The photovoltaics on Powerhouse Brattørkaia generate 50 to 60 per cent more power than the building needs. The excess is used to power neighbouring buildings via a microgrid.

"The ambition is also to be able to store energy from the summer months for the winter months in really efficient batteries," Thorsen said. "The next level is not just like zero-emissions buildings, but a zero-emissions neighbourhoods."

Other ways Snøhetta is trying to reduce the time it takes for buildings to repay their carbon debt include using less carbon-intensive materials such as wood and avoiding composite materials and glues that cannot be reused.

The firm is working on a carbon-negative hotel that will be built close to the Svartisen glacier in Northern Norway. Called the Svart Hotel, the off-grid building will generate a power surplus and will be largely constructed of timber.

Imagery courtesy of Snøhetta. Portrait is by Bjørnar Øvrebø.