Dezeen has been named Editorial Brand of the Year at the International Building Press Awards 2019 for its "well-planned and original content". The trophy now has pride of place amongst our other cups.

Judges praised Dezeen for the quality of our content and drew particular attention to our Bauhaus 100 series, which celebrated the 100th anniversary of the hugely influential design school.

"Dezeen taps into the zeitgeist, really understands its audience and has well-planned and original content," the judges said.

"There was a great deal of preparation for the Bauhaus anniversary, which paid off."

This is the first year that the International Building Press (IBP) has named an Editorial Brand of the Year at its annual awards for journalism about the built environment.

Dezeen's founder and editor-in-chief Marcus Fairs received the trophy at a ceremony in London last night, which was hosted by journalist and radio presenter Nick Ferrari. Sarah Harding, marketing director of tile company Marley, which sponsored the category, presented the trophy to Fairs alongside Ferrari.

The win follows Dezeen being named Digital Service of the Year for the past two years. 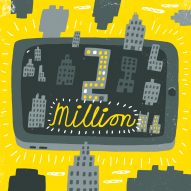 The judges also noted the growth that Dezeen has seen on its site and across all of its social media channels. This March was the best month ever for traffic to Dezeen, with over three million people visiting the site during the month.

This year has also seen Dezeen exceed 100,000 subscribers on YouTube and one million followers on Pinterest. Dezeen Weekly, our regular newsletter,  also reached a milestone, hitting over 300,000 subscribers.

"The evidence is in the stats, particularly the growth on Instagram," said the IBP judges.