Next in our high-tech architecture series is Renzo Piano's Kansai International Airport, which was built on an artificial island in Osaka Bay.

The high-tech architecture movement, of which the Italian architect Piano was a key proponent, was defined by buildings that utilised the latest developments in technology and industrial design.

Japan's Kansai International Airport, with its asymmetrical clear-span roof and visible structure, demonstrates many of the movement's qualities.

Writing for the New York Times when it opened in 1994, Paul Goldberger called Kansai International Airport "perhaps the most spectacular airport yet built, a mature work by one of the world's most intriguing architects and a dramatic work of engineering."

It was built on an artificial island three miles offshore so that it can run 24 hours a day, without disturbing the residents of Osaka.

Since it opened in 1994, the 1.1 mile long terminal has held the title of the longest airport in the world.

Renzo Piano Building Workshop won an international competition for the airport in 1988, with a design that resembles a glider plane in plan.

A total of 42 gates run along its wingspan, with the main body of the airport placed behind it like a fuselage. The building was arranged to be simple to navigate and had a light structure in order to deal with the risk of earthquakes.

The long terminal building gently curves, lifting in the middle and decreasing at either end, so that it doesn't interfere with lines of sight for the control tower.

Together with Ove Arup and Partners, the design team calculated a way of maximising the number of standardised components uses to create the geometric roof.

In total the roof is clad with 82,000 steel panels that are exactly the same shape and size supported on a steel structure that is visible inside the terminal. 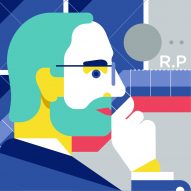 Instead of having air conditioners hanging from the ceiling, giant ducts blow air up one side of the airfoil-shaped building, circulating it in a relatively low-energy way.

Mobile sculptures by Susumu Shingu hang from the roof, their constant mobility making the flow of air detectable to the 100,000 passengers that pass through its doors each day. Blade-shaped deflectors help channel the air and reflect sunlight from the skylights.

Attached to the long building containing the gates is a building that contains check-in gates and security.

This building is covered by an undulating, wave-like roof that is supported by 80-metre-span beams held up by angled columns. Again the structure holding up the roof is completely visible in line with the high-tech architecture movement's ideals.

Kansai International Airport was designed to function as a vast machine, transporting people from train or hydrofoil to planes and back again.

Inside, the airport has a layout that is raised at the runway end to create a visual guide through the gates to departures. The asymmetry of the building is designed to make it easier for passengers to orientate themselves.

The ticket hall overlooks departures, and a glass partition had to be added after it opened to stop people throwing things to people below.

Piano designed the building for a site that was just coming into existence while he was at the drawing board. Work on the island, which is 2.5 miles long and 1.6 miles wide, began in 1987 – only a year before he won the competition. 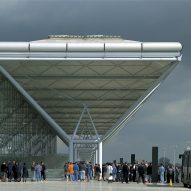 Stansted Airport "challenged all the rules of terminal design"

As a base, 48,000 concrete tetrahedrons were laid down and covered with 178 million cubic tons of earth that was dredged from the bay, quarried from local mountains, and shipped over from South Korea and China.

Finally, 900 columns on hydraulic jacks were driven into the compacted soil to support the foundations. All this is protected by a seawall of 480,000 concrete blocks anchored in steel containers.

The island was supposed to keep the airport almost four metres above sea level for 50 years. However, it began sinking before work began on the terminal in 1991.

A certain amount of subsidence was planned, however by 1990 the island had sunk over eight metres when it had been predicted to subside just under six.

Engineers have managed to stabilise the rate of sinking from 50 centimetres a year to just six, but now climate change and the more powerful storms it is bringing pose an additional threat to Piano's high-tech airport.

In September 2014 Typhoon Hebei struck Kanai International Airport. Piano's original terminal, now just a metre or two above sea level, was swamped with seawater. During the storm a tanker crashed into the bridge connecting it to the mainland, stranding 3,000 people on the island.

High-tech is an architectural style that emerged in the UK in the late 1960s, which saw the expression of structural elements and building services usually hidden within buildings.

Photography is by Shunji Ishida, unless stated. Main image is by Yoshio Hata. Illustration is by Jack Bedford.