Tesla's electric Cybertruck is billed as a radical redefinition of the car, but in fact draws on old-fashioned ideas of escape, argues Elizabeth Bisley, co-curator of the V&A museum's new exhibition about car design.

The prototype for Elon Musk's Cybertruck was launched in LA just over a week ago at a testosterone-fuelled event in Tesla's design centre. Visitors drove in past the home of the SpaceX project, skirting round Musk's latest rocket to arrive at the main event – a dry-ice- and laser-beam-filled bonanza that seemed to have borrowed its special effects from early 1980s sci-fi. But far from being a radical reimagining of the car, the design is a dystopian throwback to a time when car makers prioritised the individual and the open road ahead of them.

There was nothing (intentionally) camp or fun in this particular brand of nostalgic futurism though. As the Cybertruck drove on stage past shooting flames, audiences were treated to a pick-up seemingly fitted out for the apocalyptic age. Encased in thick, matt, rolled steel, the truck sits high on all-terrain wheels.

Its faceted body can be fully enclosed, with the truck bed (dubbed by Musk as the "vault") lockable under a retractable steel cover. The truck's design is like a mutant vision of 1930s streamlining, one that's taken the principles of aerodynamics and uninterrupted airflow to its most extreme point of enclosed capsule.

Audiences were treated to a pick-up seemingly fitted out for the apocalyptic age.

Musk has talked about the design being inspired in part by Blade Runner, and the Cybertruck's dramatic rendering of a hermetically sealed metal shell owes more than a little to fictional images of spaceships and flying cars. This is made explicit by links between the pick-up and designs produced under Tesla's SpaceX programme. The Cybertruck claims to be made from the same steel that forms the bodies of SpaceX rockets, and Musk has suggested that the truck's design anticipates life on Mars: ready for deployment once he manages to establish his promised colony on the red planet.

One of the Cybertruck's main selling points, as far as Musk and Tesla are concerned, is the incredible strength and resilience of both body and windows. This was demonstrated at the launch by chief designer Franz Von Holzhausen, who came out on stage to hit the car door with a sledgehammer – with no visible effect. 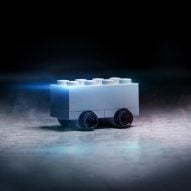 Things got a little more fun when Von Holzhausen threw steel balls at the truck's "armoured" windows. The two windows that he hit both (famously) shattered, causing Tesla shares to immediately drop and Lego to tweet the best reaction that the car has had so far.

In spite of the window break, the Cybertruck has landed with a pretty big bang. Musk claimed that 200,000 orders had been placed within 3 days of the launch and, as with all of his speculative schemes, it's attracted huge amounts of press and media attention. Much of the response to the pick-up has been focused on how radical the design is – the truck has been presented (by both its lovers and its haters) as a boundary-pushing vehicle, one whose prismatic steel form and extreme electric-powered speed and strength pushes towards a new kind of automotive future.

It was this romance of speed that contributed most forcefully to the triumph of petrol over electric engines in the early 20th century.

This is despite the fact that, within both the long and the short history of car design, the Cybertruck represents nothing so much as a highly conservative continuation of the status quo. Since the late 19th-century, when the earliest motorised vehicles began to be produced, the car has been one of the main tools through which artists, designers, writers and filmmakers have envisaged the future.

Within this set of images, which ranges from science fiction to speculative design projects, cars have almost always been pictured in the same way – fast and free-moving. Although early car designers were hugely interested in the possibilities of other forms of motive power, in particular electricity, it was this romance of speed, and of being able to drive off-road into the wilderness, that contributed most forcefully to the triumph of petrol over more infrastructure-reliant electric engines in the early 20th century.

Tesla's Cybertruck may be electric-powered, but it is locked into the exact same myths that have fuelled the petrol car since the 1890s.

Tesla's Cybertruck may be electric-powered, but it is nonetheless locked into the exact same myths that have fuelled the petrol car since the 1890s. The pick-up is designed to be extremely fast and extremely self-sufficient.

Buyers can choose between a one-, two- or three-motor model – increasing their power and speed with each upgrade. Tesla's marketing spiel emphasises the distance that can be covered between battery charges, making the very clear point that driving a Cybertruck will not cut down (in any way) on the age-old promise of the open road. 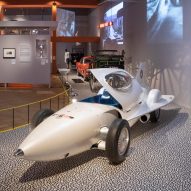 No other design object has impacted the world more than the car, says V&A show curator

In the case of the Cybertruck, this freewheeling mobility is taken to an almost rabid extreme. The design of the pick-up, with its bulletproof body and windows, its totally sealed enclosure, and its hyped-up engine power, suggests extremely dystopian driving conditions. Is Musk looking for a market of Californian survivalists? The truck seems the vehicular equivalent of a nuclear bomb shelter – privately-owned and designed for individual survival, in possibly dire conditions, outside of any cogent societal order.

After 130 years of history, the form and function of the car is currently under an increasingly urgent pressure to change. Although the most immediate need is for a move away from the combustion engine and its catastrophic environmental effects, designers, architects and town planners are also increasingly thinking about the social impact of the car.

The promise that everyone will be able to drive their own car is one that surely cannot last the next decades.

Not only do cars result in huge numbers of deaths each year (pedestrian deaths alone have increased dramatically in the US over the past 10 years), cities built for cars are often inhospitable, unhealthy, inequitable environments. The promise that everyone will be able to drive their own car is one that surely cannot last the next decades, and in order for this to change, the car's mythic underpinning in an image of motorised, off-grid adventure must also disappear.

Tesla's Cybertruck is explicitly styled on an old-fashioned image of the future. Alongside Blade Runner, Musk cites design inspiration from the Lotus Esprit car/submarine that starred in the 1977 James Bond film The Spy Who Loved Me. Both films imagine the future of the car as a highly individualised and powerful technology.

Rather than offering an alternative to existing designs, Musk pushes these ideas to newly dehumanised heights. Instead of angular steel forms on a tank-like pick-up, what we really need in future car design is a radically new approach to the relationship between technologies of mobility and the environments and societies in which they operate.

Elizabeth Bisley is a design curator and writer. She is the co-curator of the Cars: Accelerating the Modern World exhibition currently on show at London's V&A museum, where she also co-curated the 2017 exhibition, Plywood: Material of the Modern World.
Read more: