The body of Tesla's radical Cybertruck is made up of straight-edged facets. Here are some other examples of faceted architecture and design.

Designed by Tesla's chief designer Franz von Holzhausen, the radical pickup truck has a body that resembles a computer wireframe model or a polygon mesh. These are three-dimensional forms made up of flat polygons with straight edges.

The vehicle's exoskeleton is made of stainless steel, which is harder to stamp into shape like the regular steel used to made most car bodies. Instead, the Cybertruck's panels will be folded, leading to its faceted appearance.

The resulting crisp, origami-like form is common in architecture, interiors and design. While polyhedrons – solid forms made up of polygonal faces – have featured in architecture since the pyramids, recent advances in computer modelling have allowed ever more complex planar forms to be realised.

Given their association with computer imagery, science fiction and the radar-evading F117 Nighthawk stealth bomber, objects made up of polygons have a futuristic feel to them, which explains the shock at Tesla's decision to use them on their entry into the staid pickup-truck market. 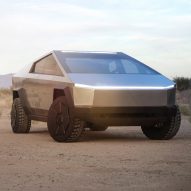 Tesla divides opinion with Cybertruck "dropped from a sci-fi movie"

Polyhedrons are particularly associated with late architect Zaha Hadid, whose faceted buildings include the Port House in Antwerp and the King Abdullah Petroleum Studies and Research Centre in Riyadh.

Other architects who have created buildings out of polygons include OMA, whose 121 East 22nd Street apartment tower in New York has faceted corners.

Designers who have experimented with faceted products include Tom Dixon, whose 2013 Y Chair had a back resembling digitised rabbit ears, and footwear designer Rem D Koolhaas of United Nude, whose 3D-printed Ice and Float shoes resemble low-resolution screen images.

In 2010, Koolhaas gave the low-res treatment to a range of familiar objects, producing faceted versions of a Lamborghini, a Verner Panton chair and the Statue of Liberty.

Here are 10 designs that feature polygons:

The 2013 Prima Installation by Zaha Hadid

The 2013 Prima Installation by Zaha Hadid saw the architect's exploration of facets realised at a smaller scale, and resembled the spiky exploding forms of her early paintings.

Find out more about Prima Installation ›

Zaha Hadid Architects' Port House in Antwerp consists of a blobby form made up of glass triangles resting on top of a former fire station.

Find out more about Port House ›

King Abdullah Petroleum Studies and Research Centre in Riyadh by Zaha Hadid Architects features facets both inside and out, and has a highly complex form consisting of tesselated volumes.

The 121 East 22nd Street apartment building in New York by OMA features angular corners chopped out of a rectilinear block.

The facade of the Espace Culturel de La Hague by French architect Périphériques is made up of triangular panels of perforated steel.

Find out more about Ramon Airport ›

This modest office in Los Angeles by Knowhow Shop features irregularly shaped panels joined together in the form of a rough gemstone.

Find out more about Lighthouse ›

R Torso C by Atelier Tekuto features an angular concrete superstructure with triangular windows cut out of the corners.

Lo Res car by United Nude is a simplification of the classic Lamborghini Countach sports car. The conceptual object is part of a series of experiments that turned familiar objects into low-resolution polyhedrons.

Find out more about Lo Res ›

Tom Dixon's Y Chair has a seat and back made of glass-reinforced nylon and brings the faceted look to the dining room.

Find out more about Y Chair ›