British practice Heatherwick Studio has designed a glass lobby to link its High Line-straddling condo towers with a scooped roof that "barely touches" the park above.

The structure will link the two towers that are currently are under construction on either side of the High Line park, at 515 West 18th Street in Manhattan's Chelsea neighbourhood.

Stepped glass panels that range in height from 10 to 25 feet (three to seven metres) will form the longer walls of the pavilion, and dip down in the middle. A coppery coloured metal-seam roof will be placed on top and curve up around the railway track that form the structure of the High Line.

"People love to live in memorable places," said Heatherwick. "As the High Line's amazing riveted steel structure goes straight through the middle of our site, we knew we mustn't miss the chance to borrow all its texture and character to make an idiosyncratic arrival experience for the building's residents."

"To not compete with the soulful materiality of this historic piece of infrastructure, we designed a lobby that barely touches it and is slung from the east building to the west, with a roof structure that gently drapes, like a piece of textile," he added.

The interior of the 1,900-square-foot (177-square-metre) lobby will be punctured by a pair of chunky columns belonging to the High Line. Inside, the firm has chosen finishes to complement the existing detail, such as a pale ceiling and chevron marble flooring.

"With the legs of the High Line lacing through, we hope that the lobby will provide a special welcome for residents and importantly, create a sense of returning home to a place like no other," Heatherwick said.

Other details include a cast glass and bronze metal reception desk, which is reminiscent of the shape of the bulging windows, as well as furniture pieces from locally based Studio van den Akker. 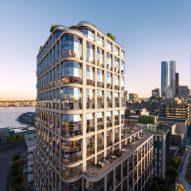 Lantern House is Heatherwick's first residential project in the US, and was first unveiled last year.

Little information had been provided about the project until October 2017, when developer Related Companies launched a website with extra design details and the project's name, Lantern House – which takes its cues from the shape of the windows.

The two towers will rise to different heights – one will be 10 stories high and the other will reach 22 stories – and have a gridded exterior formed by hand-laid antiqued grey brickwork and metal. Heatherwick Studio said it chose the materials to draw on the industrial aesthetic of warehouses in the surrounding Chelsea neighbourhood.

It will include 181 residential units that will have ceilings that reach over 10 feet (three metres) high to match the windows. The residences will come in a variety of layouts, including one to four bedroom suites and penthouses. Sales will commence early next year, with prices for condominiums expected to start at $1.7 million (£1.39 million).

Lantern House will join a series projects the designer has created for New York's West Side, including The Vessel at Hudson Yards, towards the northern end of the High Line, the and Pier 55 park on Hudson River, which was renamed Little Island last month.

Renderings are courtesy of Related Companies.