Patrik Schumacher and Harriet Harriss clashed over architecture's long-hours culture at the Dezeen Day conference in October. The movie of the discussion shows Schumacher arguing that protecting students from working too hard would lead to "a kind of socialist world of stagnation".

The panel discussion featured a group of experts and innovators debating whether architecture and design education is fit for purpose, and what can be done to improve it.

The panel comprised Neil Pinder, head of design at Graveney School in South London; Stacie Woolsey, a graduate who created her own master's course; Patrik Schumacher, principal of Zaha Hadid Architects; and Harriet Harriss, dean of the Pratt Institute. It was chaired by Dezeen's assistant editor India Block.

Schumacher clashed with the other panellists over whether students should be put under the same pressurised conditions found in the workplace.

"Talk about protecting students from working too hard, from late-night working in firms like ours, that's the wrong story," Schumacher said. Without prioritising competition and ambition in education, he warned, Europe would enter a "socialist kind of world of stagnation".

Harriss retorted that working long hours is counter-productive. "It's very important to just bust the myth here that longer hours equals productivity," she said. "There's been goodness knows how many studies that have been identified that the UK is actually less productive than countries that have a limit [on working hours]."

"They're making a two-tier system"

Before the debate, the speakers gave presentations to a sold-out audience of 450 people, drawing on their experience as educators to highlight the problems with design education today.

Asked what he had observed at secondary-school level, Pinder accused the UK government of "social engineering" by introducing Progress Eight, which are measures that mean state schools have to put their limited resources into the core subjects of English, maths and science.

According to Pinder, this means that only students whose parents have the financial means to send them to private schools, or after school classes, can receive an education in the creative subjects that could lead to a career in architecture and design.

"They're making a two-tier system," said Pinder, stressing that those who could not afford this education "will be at a disadvantage in this industry."

Woolsey shared her own experience of finding herself priced out of education when she realised she needed a master's qualification.

"It became very apparent very quickly that this wasn't going to be an option for me," she said. "I was quoted £40,000 to live and learn in London by a leading postgraduate institution. And I didn't have a master plan or a heist in place to get that kind of money quickly."

Undeterred, she made her own master's programme by writing to designers she admired and asking them to set her briefs.

One designer she approached, Daisy Ginsburg – who also gave a keynote lecture at Dezeen Day – insisted that Woolsey make the project stand for a wider message. "She said she would only help me if I made the project political," Woolsey said. "So it's political."

University education has "fragmented" since the financial crisis

Schumacher, co-founder of the Design Research Laboratory unit at the Architectural Association, warned that the school has been struggling to deliver the joined-up, research-based teaching he believes best prepares them for a career in architecture.

"Since 2008 and the financial crisis, the kind of ecosystem which was built up across different parts of the school, with co-collaborating units, has been fragmented," he said.

"You need the school as an experimentation field, as a platform of research," he added. "The education system should be strongly linked to innovative practice."

Without having the space to experiment and practice designing for competitions, said Schumacher, students cannot transition from education to work. "When you're in the weeds of the business, and you have only three weeks for a project, you simply cannot innovate."

Mental health is a "serious issue in education"

In her presentation, Harriss laid out a case for the opposite argument. She argued that by introducing the rhythms of practice life to education, institutions are perpetuating a cycle of discriminatory and outdated working conditions.

"We mimic the long-hours culture, we throw the all-nighter demands of professional practice," said Harriss.

"What we are doing, arguably, is making permissible forms of labour exploitation, and creating a work-life balance that often triggers mental health issues. And  that that is a pretty serious issue in education at the moment."

She added: "So I think that architecture education is suffering because, in many ways, it is trying to closely mimic professional practice."

Schumacher disagreed. "This is a competitive place where people are eager, have passion, want to succeed and want to do something," he said. "And you can't do that if you're told that if you work beyond the kind of eight hours, you can observe exploitation and something is wrong with you."

"This will certainly not work and there will be others who push this forward," Schumacher continued.

"Look at China," he added. "China's an amazing engine for this and you feel the hunger and the eagerness and also the all the firms starting up. And I just love this kind of prosperity engine moving forward."

"You need to readjust your periscope and see what some of the real people are really thinking," he added.

"To really create this breadth of knowledge and research like you talked about, then you need to create breadth within who's creating, and education is the bottleneck for that. If you don't diversify education, how can you ever expect to have a diverse industry?" 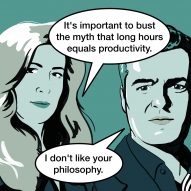 Harriss agreed with this assessment. "No one in the room is saying we need to limit working hours, we were just saying there needs to be some form of balance within the industry," she said. "It comes back to, I think, our biggest concern about this issue of access and affordability."

Diversifying architecture is crucial to a research-based education model, Harriss argued. "I think that if your research is exclusively being done by the people that it's not designed to serve, then one has to question how impactful and how relevant those research outcomes are."

The inaugural Dezeen Day conference took place at BFI Southbank in central London on 30 October. Subscribe to our newsletter to find out more about Dezeen Day 2020.