A symbol of the Freemasons – the architecturally familiar square and compass – decorates the facade of the hastily shuttered Marciano Art Foundation, formerly the Scottish Rite Masonic Temple, on Wilshire Boulevard. The tools, as part of the mysterious Masonic arcana, represent in some interpretations a belief system in which labour is held as an honest universal.

The irony is that foundation founders Maurice and Paul Marciano of Guess fame abruptly closed their museum-cum-tax-haven as visitor-services staff members voted to unionise. An act that left about 70 employees, on Los Angeles minimum wage of $14.25 (£10.83) an hour, out of work.

The Marciano's union-busting closure of a somewhat public home for their private collection, roughly 1,500 works, has sent ripples through LA's art and culture community. It comes at a moment when board membership and investments of established institutions like New York City's Whitney Museum and the Museum of Modern Art (MoMA) are increasingly scrutinised, and philanthropy is critiqued alongside curatorial efforts.

As institutional transparency comes to the fore at the board level, we must also recognise the workers who make museum-going a smooth architectural experience: gift shop clerks, ticket takers, docents and curators.

Last month, some 50 workers at the Museum of Contemporary Art in Los Angeles announced plans to unionise. In a post on Instagram, they joined forces with other institutional employees, writing, "We stand in solidarity with workers at the Marciano Art Foundation, the New Museum, the Guggenheim, the San Francisco Museum of Modern Art, MoMA, The Met, Berkeley Art Museum, the LA Museum of Tolerance". 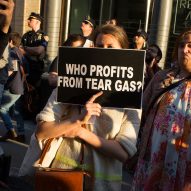 Indeed, in the summer of 2018, some 200 members of MoMA Local 2110, the museum's long-established union also known as PASTA (the Professional and Administrative Staff Association of the Museum of Modern Art), walked off the job to protest stalled contract negotiations.

Clad in matching blue shirts, the workers gathered in Yoshio Taniguchi's 2004 lobby with Philip Johnson's iconic sculpture garden as the backdrop. This relationship between labour and architecture is less tenuous than it might seem. A previous action by the union was a 134-day strike for fair pay in 2000 that took issue with the museum's $650 million (£494 million) expansion.

The monumental temple was always part of the sham

Opened in 2017, The Marciano Art Foundation at first seemed to be taking steps to ingratiate itself into the community. The choice of a local architect and the decision to preserve an existing structure bucked unpopular trends so vividly illustrated by their neighbour LACMA, several blocks west.

Kulapat Yantrasast of wHY Architecture embarked on an adaptive reuse of a building by mid-century designer Millard Sheets with the mission to make the tomb-like structure open and inviting to Angelenos.

The foundation's website – still operational, even though ticket sales are no longer and all social-media channels are down – continues to present a history of the architecture that is reflexive and self-critical: "One could not imagine a better building type to convert into an art space – all the high-ceiling rooms, wide-span structures, and extensive wall spaces with few windows – but the sense of closed exclusivity and esoteric social identity could potentially send it towards yet another isolated art bunker".

Work is something performed by other people. We design

But rhetoric quickly falls away in the face of the Marciano's actions. In a recent piece in the Art Newspaper, Jori Finkel argues that the monumental temple was always part of the sham, a mere stage set to hide the financial machinations of private art collectors, just as for decades it held the secrets of LA businessmen and leaders who were Masons.

"It was the shell of a museum, the illusion of a museum or – maybe most deceptively for those of us who judge an institution by its facade – architecture worthy of a museum," she wrote.

Certainly, there are folks who will bristle at the implications that architecture or architects might bear any responsibility in regard to labour, shifting it towards the client and claiming a designer's privilege of neutrality. We can't forget the notoriously redacted and apologised for phrases from Martin Filler's 2014 article in the New York Review of Books that linked comments by Zaha Hadid to worker deaths on site of the Qatar stadium. The subsequent libel suit by Hadid against Filler successfully placed accuracy – the stadium wasn't under construction at the time – over empathy.

Digital tools and the gig economy have effectively atomised our understanding of workers, transforming what was once physical and material into something more conceptual: the seamlessness of rideshare and food delivery; displacement represented by render farms and telemarketing; or unspoken gendered tasks of domestic and emotional labour.

Work is something performed by other people. We design. Groups like the Architecture Lobby, whose members actively embrace the identity of architectural workers and aim to unionise the profession, or Who Builds Your Architecture, which tracks international chains of production in construction with an eye towards revealing exploitative labour practices, lead discussions of labour within US context.

Harriet Harriss, dean of New York's Pratt Institute School of Architecture, suggests that the devaluing of labour begins in architecture school and is then internalised and reproduced after graduation with toxic results.

"What we are doing, arguably, is making permissible forms of labour exploitation,” she noted in a heated debate with Patrik Schumacher about architectural education held as part of the Dezeen Day conference in October.

What happens when, instead of dodging, we change our frame of reference? I think of the painting of Los Angeles-based artist Ramiro Gomez, which first gained art-world attention as he mimicked David Hockney's composition, carefully swapping out figures of patronage and taste for migrant labourers: pool cleaners, landscapers, nannies. At art fairs he regularly paints portraits of the janitorial staff, thus elevating and valuing their ever-unrecognised efforts as they sweep up art market detritus.

What if we look at museums and places like the Marciano Art Foundation neither as edifices in service to the ideals of art and culture, nor as visitor-centric pieces of the experience economy? Let's recognise them as what they are: places of work. A whole new set of architectural criteria and formal response is revealed when we shift the paradigm and design in solidarity.

Mimi Zeiger is a Los Angeles-based journalist and critic. She has covered art, architecture, urbanism and design for a number of publications including The New York Times, Domus, Dwell, Architects' Newspaper, and Architect.

Photograph of Marciano Art Foundation is by Yoshihiro Makino.