Update 27/03/20: Reviews from technology experts suggest that the Escobar Fold 2 is in fact a Samsung Galaxy Fold with gold sticker branding. There have also been reports of orders for the phone not being fulfilled.

"As we have told numerous outlets, the Fold 2 is a rebranded Galaxy Fold, mainly due to a large amount of overstock and returns due to unsuccessful sales by Samsung," Escobar Inc CEO Olof K Gustaffson told Dezeen in response to foll0w-up questions.

"As far as delays, we like many other businesses are facing significant delays due to Covid-19." Gustaffson added that the company was suing its former Chief Operating Officer over the alleged misappropriation of company funds.

The Escobar Fold One smartphone has a stainless steel case in a brushed gold finish, a flexible screen and a dual camera for taking photos.

The screen allows the phone, which runs on the Android operating system, to open out so it can be used like a tablet. The phone has a monogram of the letters PE placed prominently on its front.

"They have always been very innovative people," he told Dezeen. "We believe we can beat Apple and now we will see soon,"

Escobar Inc was founded in 1984 in Medellin, Colombia, as a general holding company for the Escobar brothers' assets.

The late Pablo Escobar, leader of the Medellín drug cartel, was killed in a shootout in 1993. His brother Roberto Escobar was released from prison for good behaviour in 2004.

Escobar Inc launched the product with a series of explicit stills and videos featuring models, including Miss Playboy Russia 2017. Wearing lingerie, and sometimes nothing at all, the models pose with the Escobar Fold One and demonstrate the phone's folding technology. 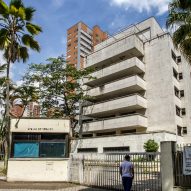 Pablo Escobar's former Medellín home to be torn down

Shot on location in Russia, the highly sexualised promotional material include the phone being presented in a leather briefcase similar to those used in drugs or weapons deals in films.

Escobar Inc claims that the The Escobar Fold One, is completely indestructible.

"Mr Escobar has done a serious amount of testing and so far not one single unit has broken," said Gustafsson. "Our screen is made of a special type of plastic which is far superior in durability than glass."

The display screen features Active Matrix Organic Light-Emitting Diodes (AMOLED) technology, similar to what is used by Samsung for its Galaxy Fold model.

Other features including a fingerprint sensor, a Qualcomm Snapdragon 8 Series chip, and a Qualcomm Adreno 640 Graphics Processing Unit.

Gustafsson said the decision to offer the phone in just one colour – gold – was part of a decision to make the phone more affordable than its competitors.

Other foldable smartphones launched in 2019 include the Mate X by Huawei, Microsoft's Surface Duo, and a revamped Motorola Razr flip phone. Samsung was forced to delay the launch of the Samsung Galaxy Fold after reports of screen breakages.

Earlier this year, Roberto Escobar threatened to sue Elon Musk over selling a flamethrower he claimed was designed by him and Pablo.

Last year, Pablo Escobar's former house in Medellín was demolished by the government.