The Slow – which was formerly an old-school cafe – accommodates a shop, eatery, co-working area and meeting room that locals can hang out in throughout the day.

It's situated in Mar Mikhael, a trendy part of Beirut populated with an abundance of restaurants, art galleries and boutiques.

For the interiors of the store, Frama curated a material and colour palette that they felt captured the laid-back feel of the neighbourhood and wider Beirut's "energetic mix of old and new".

"When designing The Slow, the context absolutely took an influence in the design," head designer at the studio, Cassandra Bradfield, told Dezeen.

"I wanted to create a neutral and relaxed atmosphere that suits the culture of the area but with some memorable features."

Towards the front of the store lies the cafe, which has been dressed with circular, wooden tables and jet-black iterations of Frama's Chair 01 model.

A short flight of steps leads down to the retail space, where clothing garments are openly displayed inside a tall, timber shelving-unit that's been pushed up against the wall.

The same minty green cement that covers parts of the store's floor has been used here to craft chunky display plinths and an in-built sofa, features that the studio hopes will "achieve a permanency to the space". 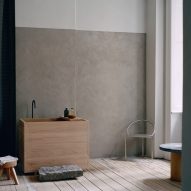 An off-white curtain has also been fixed to a circular track to form a small changing room.

At the rear of the store lies a work area that features marble-topped tables and exposed-bulb pendant lamps.

Surfaces throughout the store have been covered in a beige-tinted limewash, excluding the meeting room where walls have been left in an unfinished state.

Frama, which is based in Copenhagen, also saw The Slow as an opportunity to incorporate design details that they typically have to omit on home turf.

"A folding glass door that remains open to the courtyard most of the year creates the sort of indoor-outdoor space that works beautifully in Beirut – such features would not usually work in a Nordic context," explained Bradfield.

The Slow is the latest project to be realised by the interiors-dedicated department of Frama, which also creates minimalist furnishings, homeware and skincare.

Earlier this year the studio also developed the aesthetic of Copenhagen restaurant Yaffa, which is meant to evoke the same ambience as a bustling French bistro.