More than 60 international architecture firms have put artworks and signed drawings up for auction, in a bid to raise funds for rebuilding Beirut after the explosion that rocked the city in August and left at least 300,000 people homeless.

Among the items for sale is a lithography by David Adjaye rendered in 24 karat gold leaf, a one-off sketch by Renzo Piano and a limited edition sculpture designed by the late Zaha Hadid.

Called Architects for Beirut, the auction is being hosted virtually by the Design Miami fair and will be live until the end of November, with all proceeds going to the Beirut Urban Lab.

This interdisciplinary research space was originally founded by faculty from the American University of Beirut's Department of Architecture and Design, in order to counteract the destruction of civil infrastructure that occurred during Lebanon's 2006 war with Israel.

Now, the collective is focusing on rebuilding the city in an equitable, sustainable way in the wake of the blast by helping to coordinate bottom-up efforts on both a neighbourhood and a wider urban planning level. 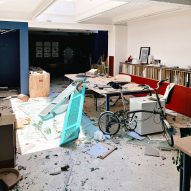 "Even before the explosion, the country was going through an economic and financial crisis that paralysed the banking system and the government's capabilities to deal with the aftermath of the blast," said Makram el Kadi of New York architecture firm LEFT, which organised the auction in collaboration with the dean of Columbia's Graduate School of Architecture Amale Andraos.

"This was made even worse with the outbreak of Covid 19," he added. "And mistrust in the government's ability to secure foreign aid – let alone manage it – led to a plethora of small local and international NGOs filling that void."

In particular, Beirut Urban Lab is planning to help reconstruct crucial infrastructure like hospitals and emergency accommodation, as well as gardens, libraries and other public spaces that hold a significance for the local community.

A number of original, one-off artworks, which pay homage to the city of Beirut, were created especially for the fundraiser to support these efforts.

Lebanese architect Lina Ghotmeh, who compared the explosion to a "nuclear blast" after witnessing it from a local cafe, contributed a hand drawing of her apartment block The Stone Garden, which was completed shortly before the blast.

Although the building's monolithic shell survived the explosion, the sketch captures the moment when all of its glazings shattered, as was the fate of countless buildings up to 10 kilometres away from the site of the blast.

"Renzo Piano's sketch showcases a certain hope that permeates the current grief – a scenario in which planning for a better tomorrow is still something one can and must dream about," El Kadi told Dezeen.

Others contributed architectural drawings and prints of notable buildings they designed, including an axonometric drawing of BIG's Amager Bakke power station in Copenhagen, signed by one of the firm's partners Kai-Uwe Bergmann.

Norman Foster shared one of a limited run of 100 lithographies, showing a modular school his firm completed in Sierra Leone in 2009, which was built using locally available materials such as timber planks and metal sheets. Previously, another edition of this same print was gifted to the Queen of England to commemorate 60 years of her reign.

Fellow architecture stalwart Sir David Chipperfield put up a print, depicting the concrete bridge he designed as an extension of the Royal Academy of Arts, while David Adjaye contributed a gold-gilded lithography of his multifaith temple The Abrahamic Family House in Abu Dhabi.

Since banning renderings in her studio, Mexican architect Tatiana Bilbao works mainly with collages, one of which is up for auction as part of Architects for Beirut, while Zaha Hadid's design studio contributed one of the few three-dimensional artworks to the fundraiser.

The smoked acrylic sculpture, called the Serenity Centrepiece, features the architect's characteristic fluid, sinuous lines and was donated on her behalf in recognition of her "deeply personal" connection to the city, which many of her friends and family call home.

Meanwhile, Archigram founder Peter Cook offered up a print of his 2013 gouache drawing Hidden City and the Frank Lloyd Wright-designed Guggenheim Museum is the star of a letterpress print, created by New York studio SO-IL for an exhibition celebrating the building's 50th anniversary in 2010.

"In addition to the architectural imagination that the drawings inspire in us, they collectively express a wonderful sense of generosity and global solidarity," LEFT co-founder Ziad Jamaleddine told Dezeen, "which is a quality that is hard to mobilise in an increasingly fragmented world."

Since August, the design world has shared an outpouring of support for the citizens of Beirut, with Erik Spiekermann being one of 157 designers to contribute a glyph to a new typeface with the aim of raising funds for victims of the blast.

Meanwhile, design duo Bokja has transformed its showroom in the city into a temporary furniture clinic, where members of the community can bring in any items damaged by the explosion to be stitched back together using red thread, nodding to how golden lacquer is used in the Japanese craft of kintsugi.