Silva's technique, which was developed over the course of three years, sees chalk mixed with a common byproduct of the dairy industry – the excess skimmed milk which is created in the production of butter and cream.

"The proteins are extracted from fresh milk and combined with chalk to produce a material similar to air drying or polymer clay," she told Dezeen.

"It can be hand thrown or pressed into moulds, but these particular objects are created by extruding the material into moulds using a sausage stuffer."

The surplus milk comes from an organic dairy farm in Surrey, and the chalk from a quarry in Hampshire. For the moulds, Silva uses another post-industrial waste product in the form of deadstock fabric.

Once dried, the finished material has a surface reminiscent of stone or concrete. In the Chalk & Cheese collection, this is left mostly exposed, save for the doorhandles which are variously painted in speckled blue and rust shades. 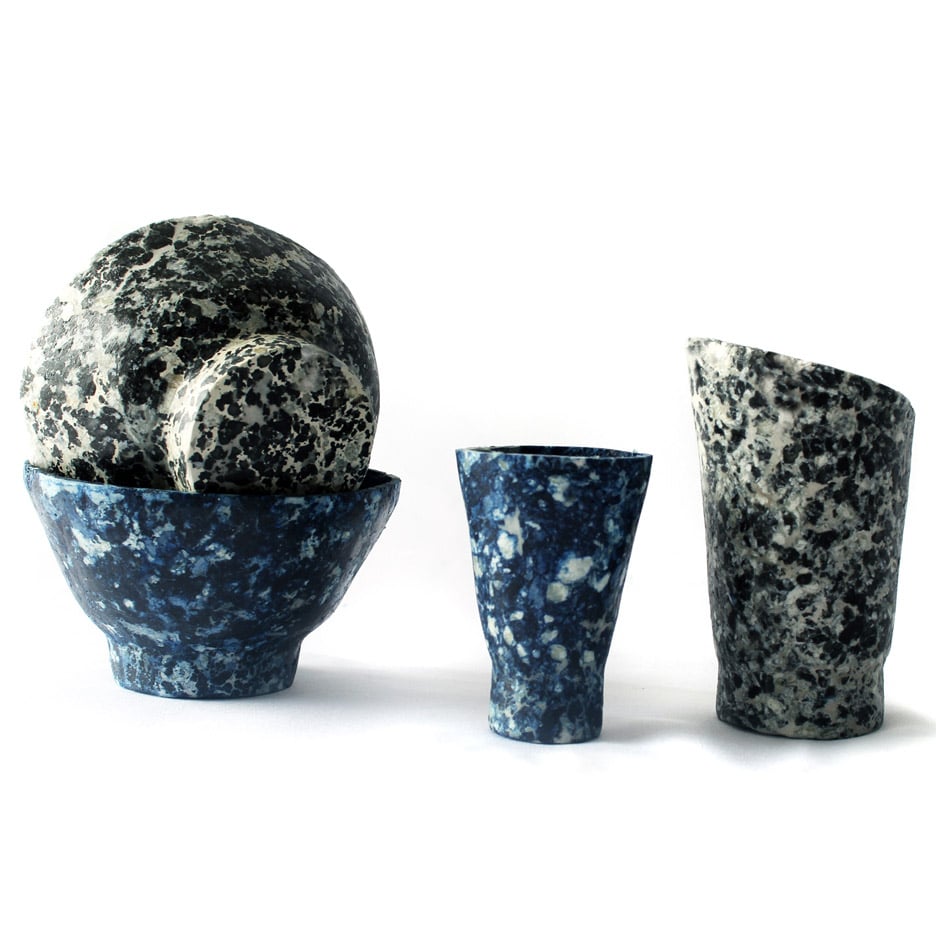 As well as being locally sourced, the material can be easily composted and used as fertiliser once it is no longer needed.

"In order to use it as compost, it would need to be soaked in water for a number of hours, where it will eventually begin to decompose and crumble into dust," she explained.

Silva's material is a modern take on one that was originally used as flooring in the Tudor period.

"It was made using sour milk that had expired, and was poured similarly to concrete," said the designer. "The material that I have adapted from this is much more solid."

"Extracting the milk proteins means the material is purer and harder in consistency, and doesn't take much time to cure or dry when compared with the Tudor milk flooring, which apparently took weeks to set."

This isn't the first time the designer has worked with milk, having previously used it as a plastic alternative for her graduate project at the RCA.

"I find the material of particular interest considering the controversies that are associated with milk consumption," she explained. "It's an interesting time for the industry due to the huge movement toward veganism."

"Whilst I don't necessarily believe that vegan design is the only way forward, I do believe that we need to drastically reevaluate our relationship with animals and food products," she continued.

"The project is very much anti factory-farming – I am exploiting a current surplus in the industry, and as long as this surplus exists, so can the project."

Silva passes on her method through public workshops in association with the educational programme Store Projects, and in the project's design courses for school pupils.

"The After School Club workshops are of particular importance to me as they introduce students to a variety of design processes with a focus on sustainability," she explained.

"It's so important that young people get the opportunity to explore such diverse creative processes."

Elsewhere, designers have used waste byproducts from the beer and coffee industry to create a collection of lights, as well as turning unwanted fruit and vegetables into natural dyes.