Italian design studio High Society is putting waste from the local beer and coffee industry to good use, by turning it into a range of tubular lights and using profits to fund dependency prevention.

The Senilia collection was first revealed as part of the Warsaw Home fair last week. Each piece features the same pipe-like shape, bent and twisted into five variations for each of the two colour-ways.

The shades are derived from the natural pigmentation of the different forms of waste, which High Society collects directly from the source.

The discarded coffee bean peels, also called silver skins, are already dry and can immediately be shredded, while the leftover hops and barley from breweries need to be dehydrated before they can be processed into a powder.

"The different powders are mixed with a compostable binder and put through an extruder, which ejects it under high-pressure through a pipe," co-founder Johannes Kiniger told Dezeen.

"This turns the material into a straight, tubular structure that's then handcrafted into irregular shapes and air-dried for several days."

Although it appears to be soft and flexible, the lamp's body actually solidifies into a hard, unchangeable structure through the drying process.

Senilia's imperfect, organic forms are meant to show the toll that time takes on any living organism and reference the production process itself, which finds value in materials even when they are seemingly past their prime.

The lights are held together without screws, meaning the electrical components can be easily removed so that the body can be composted.

In previous collections, High Society was dependant on the kind of metal and plastic sockets that can be found in most lamps.

"Finding alternative solutions to the metal-plastic components was difficult given the strict security standards that need to be followed," explained Giulia Casaro, the other half of the duo.

But for Senilia, the studio found a workaround: "The lightbulb holder for the new collection is made out of ceramic, which makes it fully recyclable and non-polluting. The cable insulation is made from textile and can also be recycled," said Casaro.

In addition, using an extruder means the production process is not reliant on heat, and any energy needed to create the collection comes from entirely renewable sources.

The aim of it all isn't just to create an understanding of waste as a primary resource, but also to help people think critically about these ubiquitous substances and their potential misuse. 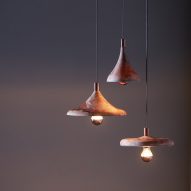 "By de-contextualising them, we would like to stimulate a discussion and promote critical thinking," said Kiniger.

"Without a certain awareness about the topic, it becomes much easier to fall into addiction. We believe that the right information can really make a difference in preventing abuse."

That's why part of the earnings from each sale go to a project by the Forum Prävention in Bolzano, Italy, which spreads reliable information about drugs to young revellers on the weekends.

The Senilia collection follows on from High Society's first series of lamps, which was made using byproducts from tobacco, wine and hemp production.

Elsewhere, designer Zhekai Zhang has used waste coffee grounds to create a marble effect on a series of porcelain lights, while Nicole Stjernswärd has developed a system that turns fruit and vegetable waste into natural pigments for paints, inks and dyes.