Yinka Ilori has rounded off a busy year by designing a stylised Christmas tree for London's Sanderson hotel, featuring his signature colourful and graphic aesthetic.

Ilori designed the 2.5-metre-tall Christmas tree to greet guests as they enter the lobby of the Philippe Starck-designed hotel on Berners Street.

The sculptural installation comprises five geometric forms that are layered to create a simplified representation of a Christmas tree. The design of the tree is also intended to evoke a stack of colourfully wrapped presents.

Each element is rendered in a different colour, with adjacent surfaces on some of the components also contrasting to enhance the three-dimensionality of the construction.

Ilori designed the installation to be made using standard industrial materials including pieces of sawn timber and plywood sheets.

The solid base contains a light source that illuminates the centre of the open structure. Light passing through gaps in the structure casts shadows on the surrounding surfaces. 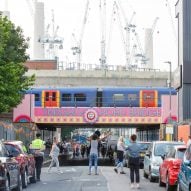 The tree occupies a prominent spot in the lobby of the West End hotel, which was completely refurbished by Starck in 2000. The heritage-listed 1950s building was originally a company headquarters and retains many of its original features.

The Christmas tree is the latest in a long list of commissioned projects in the capital that has seen the designer revitalise an unloved railway bridge, co-create a multicoloured pavilion at Dulwich Picture Gallery, and handle the design of an exhibition celebrating black creativity at Somerset House.

Ilori also participated in the judging panel for the 2019 Dezeen Awards and gave an interview in which he expressed concern about being merely as a colourist rather than a multidisciplinary designer.

His other projects have included a geometric-patterned playground installation for Pinterest and a collection of brightly coloured chairs created together with volunteers from a social enterprise.

Previous examples include a latticed pavilion with a stepped internal form evoking a typical tree's silhouette, an installation made from illuminated light fixtures, and a full-sized Christmas tree that appeared to be encased in ice.