Ten large-scale light installations have been displayed at Liverpool's waterfront for the River Of Light art exhibition, including bespoke designs by French artist Camille Walala and London designer Yinka Ilori.

The River Of Light exhibition coincides with the city hosting the World Gymnastics Championships 2022 and to commemorate the sporting event, it was given the theme Unexpected Twist in reference to gymnastic movements.

The ten installations that make up the exhibition have been displayed along a two-kilometre-long walking trail that meanders through Liverpool's waterfront.

Among them are the pieces by Walala and Ilori, which marked the first time that the designers had created light installations.

Situated at the Royal Albert Dock in front of the Dr Martin Luther King Jr Building, Walala's design is an abstract mixed-media piece made from steel, acrylic and LED lighting.

The artist designed the installation – called Turn The Light On, It's Dark In Here – without a solid background, so the building behind could be seen in conjunction with it.

"I have tried to create a sculpture that looks equally as good in the day as it does at night," Walala told Dezeen. "When the lights come on at night it adds extra depth."

"I would love the visitors to think about forms and colours and how they can interact with each other," she continued. "I hope it creates a little spark of joy!" 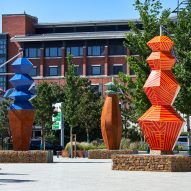 Ilori collaborated with composer Peter Adjaye to produce a soundscape for the installation that turns it into an immersive experience.

Other installations showcased at River Of Light include an interactive multiplayer game named Light Looper and a series of archways named Rainbow Accordion, which are connected to pads that visitors can jump on to send light and sound travelling through the archway.

Each of the 10 artworks on display responds to the exhibition's theme, Unexpected Twist.

"We thought long and hard about how to bring together the worlds of art and sport and loved this idea of the unexpected – a moment that you think is going in one direction and then switches – as being a unifying idea between the two," said Robin Kemp, creative director for Culture Liverpool.

"For us, River Of Light holds a really crucial place in the cultural identity of Liverpool. From the outset, we wanted to treat it as a serious commissioning festival, not simply as a light show, while at the same time making it as accessible as possible."

River Of Light is partnering with social project Make Bank to deliver a creative education programme aiming to make art more accessible, including master classes and discussions delivered by the installation designers.

"It is crucially important to us that artists play the widest possible role in the city and this is a simple and engaging way of inspiring the next generation," said Kemp.

Other outdoor art installations displayed in the UK include the 35-metre-tall See Monster installation in Weston-super-Mare and an illuminated domed decorated with pencil drawings of endangered species in London.

The photography is by Jack Finnegan.

River Of Light takes place from 21 October to 6 November 2022 in Liverpool, UK. See Dezeen Events Guide for an up-to-date list of architecture and design events taking place around the world.