COBE has completed the Halftime building at the Adidas headquarters in Herzogenaurach, Germany, which is distinguished by a giant rhomboid-shaped roof.

The 15,500-square-metre Halftime building was designed by COBE as a multifunctional venue that provides staff, brand ambassadors and visitors to Adidas' World of Sports campus with an array of formal and informal meeting spaces.

Its facilities are unified by its giant flat roof, which is made from V-shaped concrete beams and dedicates a third of its footprint to skylights that maximise natural light inside.

"To accommodate the many internal and public functions that Halftime includes, we designed a versatile, multi-purpose building that brings as many of the company's activities and functions as possible together under one roof," says COBE's founder, Dan Stubbergaard.

"The huge rhomboid roof covers the entire building like a carpet, bringing staff, visitors and brand ambassadors together in the same building and thus enabling more and wider contacts.”

Halftime was the winning entry in a competition held in 2014 as part of a wider masterplan for the Adidas' World of Sports campus, which is being transformed into a visitor attraction.

Its completion follows Behnisch Architekten's construction of an office and reception building designed to look like a sports stadium and the addition of bright landscaping by LOLA Landscape Architects.

Inside, Halftime contains 12 workshops and a large event hall for 1,500 people, alongside meeting rooms, a conference centre and a large canteen.

It is complete with a showroom, which COBE incorporated to enable the company's brand ambassadors to see the latest designs, collections and ideas.

According to COBE, the building was designed to echo Adidas' culture and has a variety of playful, dynamic and "unusual spaces inside.

This includes two meeting rooms that resemble a swimming pool and the Adidas founder's old workshop, and main event space, which has wooden wall bars to evokes the interior of a school gym.

"A key task was to create the right atmosphere to reflect the unique Adidas culture. We did this, in part, by matching the different needs with different sports, making room for big ideas and large gestures as well as a touch of humor," added Stubbergaard. 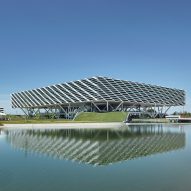 "In addition to the event hall, which is designed as a gym, you can hold meetings at the bottom of a bright blue swimming pool, in a locker room or in the Adidas founder Adi Dasler's old workshop, complete with tools."

COBE also sought to create a strong connection with the outside throughout Halftime. Interior finishes use natural materials and have floor-to-ceiling windows, while planted walls and conservatories with trees and plant beds are dotted throughout.

As part of the project, COBE also designed a chair for the building in collaboration with the Danish design brand HAY that is used throughout.

COBE is an architecture firm founded in Copenhagen in 2006 by the architect Dan Stubbergard. Halftime is the the studio's first completed project in Germany.

Other recent projects by the practice include the Roskilde Festival Folk High School that is built in an abandoned factory, the extension to the Danish Red Cross headquarters with an "urban living room", and a wedge-shaped library in Copenhagen.

Photography is by Rasmus Hjortshøj of COAST.