Ford's latest electric vehicle is the first addition in 55 years to its lineup of Mustangs – the classic American cars known for their powerful engines.

The Mustang Mach-E is an SUV rather than a sports car, but the automaker aims to bring the brand's associations with style and speed to its new fully electric vehicle.

It is the first all-electric model to be introduced into the Mustang family, marking a significant change from the vehicle type's reputation as a high-performance "muscle car".

"Ever since the original Mustang took the world by storm in 1964, it quickly came to represent the best of the American spirit: freedom, progress, fast performance and a touch of rebellion," said the automaker.

"Now, Mustang is ready to reimagine these ideas for a powerful electric future," it added.

The Mach-E has a targeted minimum range of 300 miles, a 332 horsepower and 417 pound-foot of torque.

Ford is also offering a high-performance version of the car – the Mustang Mach-E GT – which has a targeted acceleration of zero to 60 miles per hour in less than four seconds and an estimated 459 horsepower.

While this is less than many electric sports cars on the market, it is more than other family cars. 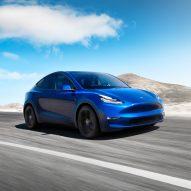 Both Mach-E models will have the option of an extended-range battery that can deliver at least 300 miles on a single charge in rear-wheel drive.

Both rear-wheel-drive and all-wheel-drive versions are available, with all-wheel drive reducing the battery range.

"People want a car that's thrilling to drive, that looks gorgeous and that can easily adapt to their lifestyle – and the Mustang Mach-E delivers all of this in unmatched style," he continued.

The Mach-E will be available by late 2020, but has already sold out on pre-order in the US. The Mach-E GT is slated to arrive in spring 2021.

The vehicles will come with three driving modes titled Whisper, Engage and Unbridled. These modes affect aspects of the vehicle such as steering controls, ambient lighting, sound and display animations.

They are designed to allow the driver to enjoy either the quiet environment enabled by the electric engine or to turn on features that simulate riding in a sportier vehicle.

Externally, Ford has aimed to bring some elements of classic Mustang design to an SUV form. The automaker points to the elongated hood, rear haunch, "aggressive" headlights and tri-bar tail lamps as features that continue the Mustang design language.

A new addition is the drainable front-trunk storage unit, created to be packed with ice and filled with drinks, and buttons in place of conventional door handles.

"The Mustang Mach-E is the kind of car that gets people excited about driving, with a sporty, beautiful silhouette that delivers an incredible shape rarely seen in SUVs," said Ford Mustang Mach-E chief program engineer Ron Heiser.

The Mustang Mach-E will be available with either a standard-range 75.7 kWh lithium-ion battery or extended-range 98.8 kWh battery.

The car is the first addition to the Mustang lineup in 55 years. The first Mustang went into production in 1965 and the first Mach 1, positioned for high performance, appeared in 1969.

Its competition in the electric SUV market includes the Tesla Model Y, which can reach zero to 60 miles per hour in just 3.5 seconds and has a range of 230 miles on its standard battery.