American architect Paul Andersen has designed a series of commercial structures in Colorado with deceptive facades that rise higher than the actual buildings – a style that was popular in the Old West.

The project, called Emerald Workshops, is located in Frederick, a small town just outside of Denver and near a major highway.

The mixed-use complex was designed by Paul Andersen, founder of the Colorado studio Independent Architecture. The development consists of eight buildings of varying sizes – each with customisable units that can be purchased or rented. The units range from 1,500 to 48,000 square feet (139 to 4,459 square metres).

The structures are arranged in rows on a flat, rectangular site, with driveways and parking spots woven into the 5.2 acre (2.1-hectare) campus. The overall scheme is meant to foster a "social-commercial environment that bridges the gap between an urban main street and spacious rural landscape".

"Responding to the changing landscape of retail, work and the city, Emerald Workshops is a new typology for an emerging community and its economy," the architect said in a statement.

The buildings are rectangular in plan and form, although certain elevations are fronted with walls that extend above the roof and have staggered tops – giving the buildings a more sculptural appearance.

This design element takes cues from the false-front facade that was common in the American West in the 19th and early 20th centuries. The "Frontier West" facade rises vertically to form a parapet that conceals the building's roof and true height.

Andersen's structures are meant to offer a "new take on Colorado's historic architecture". 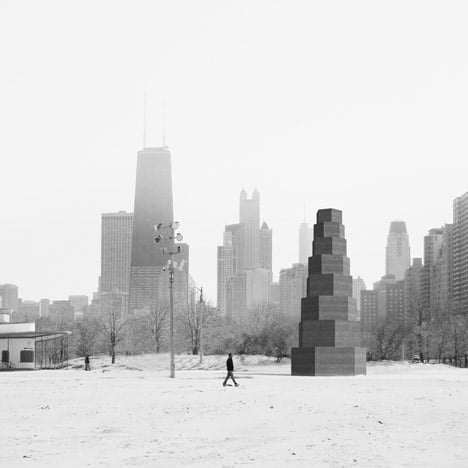 "They combine the false-front commercial architecture of the Old West with industrial construction that has been common since the 1960s," the architect said.

"Our design approach aims to strike a balance between familiar and new architecture – to make a place that is deeply connected to our region and, in its own subtle way, unlike any other commercial project."

Another distinctive architectural element is the exterior cladding. Facades are wrapped in a combination of scalloped fibre-cement shingles and metal siding painted in shades of pink, grey and white. Windows are trimmed with concrete blocks.

"We selected materials for their timelessness, durability and clean details – in the buildings and the surrounding landscape," the team said.

Interior rooms were left unfinished, enabling tenants to design them to fit their needs. Ceilings rise to a height of 26 feet (eight metres) to allow for industrial equipment or the insertion of a mezzanine level. Glazed garage doors "create an effect of transparency and light".

Construction is continuing on the campus and will be completed next year. The master plan calls for exterior lighting and planters that will enliven the complex and help establish outdoor work areas.

The campus is already filled up with tenants, including a construction firm, a mobility retailer, a cross-fit gym and an architecture firm.

Paul Andersen established Independent Architecture in 2009. Other projects by Andersen include a barrel-vaulted pavilion created in collaboration with Paul Preissner for the 2015 Chicago Architecture Biennial.

Photography is by Ehren Joseph.